Catch me if you can

I am relieved. We found tawaki in the water. And lots of them. And exactly where I said we would find them. So my job is basically done. After the relative penguin-scarcity we had experienced on our random walk tour yesterday, we managed to get out to Gull Rock today. It was still quite bouncy but Ida-san managed to sleep through another potential bout of sea sickness.

It was a cold day though. And the wind blew pretty hard, first still from the North but then from the West. And it rained. A lot. All in all not a pleasant mix to be standing on the deck of the Stingray to look out for penguins.

But we did not really have to. 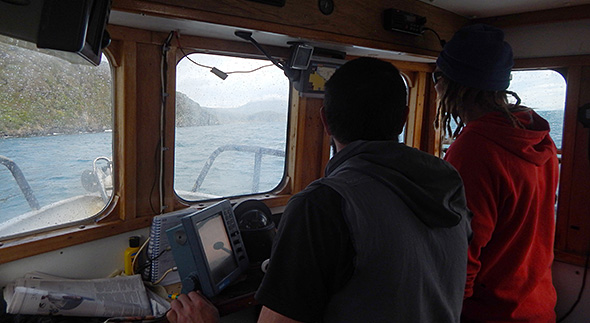 When we approached Bungaree Bay we could see a considerable feeding flock of white-fronted terns feeding off Gull Rock.

“That’s where we need to go”, I said to Morgan. But considering that it was too choppy to go out in the dinghy let alone dive, we decided to head into calmer waters of the bay to prepare the equipment and get Hongo and Haruki-san ready for diving. 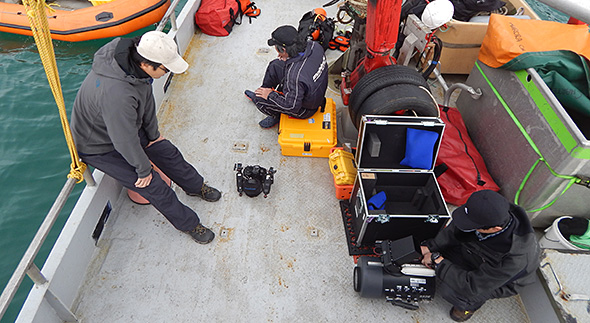 At around lunchtime we headed back out. Getting closer to high tide, the waves had settled quite a bit and it looked a lot calmer generally. As soon as Gull Rock came into view, we spotted once again a large group of terns dive bombing into the water.

“There’ll be penguins” I proclaimed and Morgan replied “Then that’s where we go.”

Well, not only did it turn out that I was right, but that I was super-right because there easily 30-40 tawaki foraging around Gull Rock amidst a true dive bombing staccato of white-fronted terns and Sooty shearwaters.

Some smaller groups of tawaki were rather close to the boat, others a bit further away. Some groups were obviously foraging where birds spent little time at the surface before they disappeared again, while others were resting and just sitting on the surface like ducks in a pond.

A huge weight was taken off my shoulders. I have gotten the guys their diving tawaki. I had kept my promise and done my job. Now they had to do theirs.

And this is where it started to get really, really complicated. 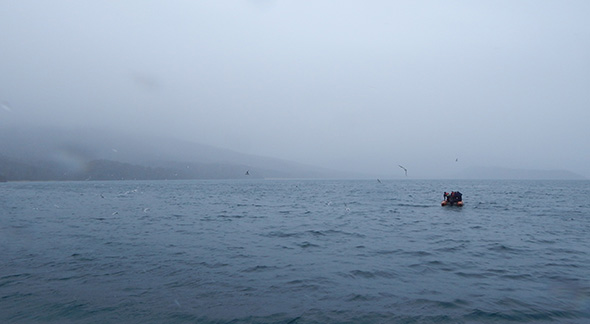 It wasn’t that it took Luke, Hongo and Haruki-san long to get the gear and themselves into the rubber dinghy. It wasn’t even that they did not manage to get closer to some of the groups of penguins. No, the problem was that as soon as one or two of the Japanese camera men had entered the water that the penguins disappeared.

Hongo and Haruki-san would clamber back into the dinghy and Luke drove them off to the next group of dive-bombing terns for that was where the penguin now were. For the next hour or so the dinghy just zoomed from here to there only to find the penguins gone once camera men and gear were in the water. 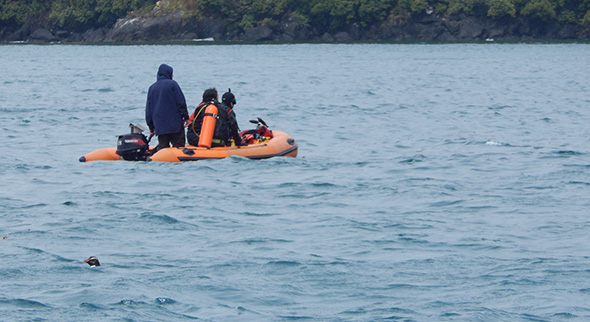 While the dinghy was doing its thing the tawaki would show up next to the Stingray looking up at us (or as I had the feeling, particularly at Ida-san) as if laughing to our faces. It was a slick performance by the birds, as cool and composed as Leonardo Di Caprio in “Catch Me If You Can” while Ida-san got more and more frustrated trying to direct the dinghy form here to there by waving his arms frantically. I reckon he outdid Tom Hanks by at least a mile in his desperate demeanour.

After the tide had turned fewer and fewer penguins seemed to be around. However, more and more fairy prions showed up and by 2 o’clock some 300 of the tiny petrels were hovering directly above the sea surface around our boat, ducking their heads into the water to check for prey and then disappearing below for a quick feeding dive. 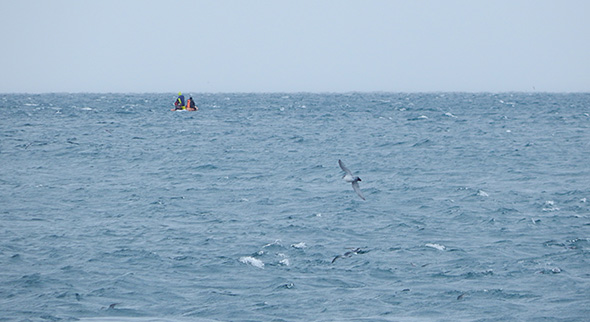 Fairy prions not on the film maker’s agenda today

I would say that must have looked pretty spectacular from below the surface. But Ida-san is here to get Di Caprio aka the penguins and the beauty of great numbers of fairy prions diving in tightly packed groups eluded him completely. 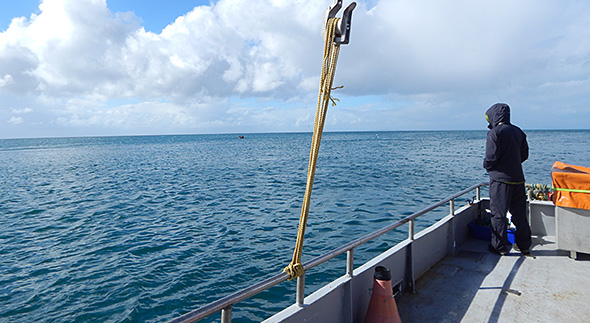 As the tide got stronger the waves started to make finding Tawaki difficult for the guys on the dinghy. The frequent downpours did their thing to complicate things even further. Ida-san weathered any changing condition at the stern of the Stingray trying to direct the dinghy from here to there. But the guys out there probably did not even see him. They just kept on zooming hither, thither and wither. Very infrequently one of them would go in the water only to be picked up by Luke a minute later after an obviously unsuccessful splash.

At around 6pm they gave finally up. Not a single second of underwater footage was recorded. Hongo and Haruki-san had hardly used any of the air in their tanks. When I asked Hongo about the deepest depth he reached his reply was “30 centimetres”.

And when I asked him if he had seen any of the penguins underwater he said “Yes, one. For 0.5 seconds.” 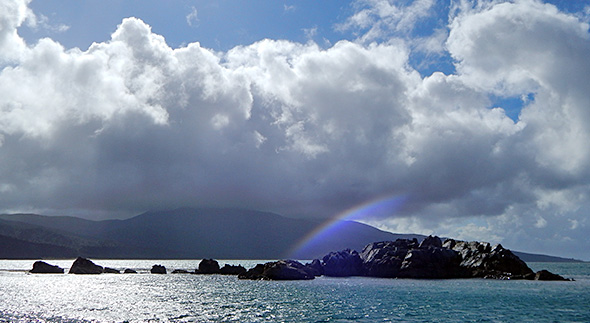 We steamed back to town. The weather is supposed to improve somewhat tomorrow, especially the swell should be a lot better with little wave action if any.