About 20 years ago, Ian MacLean devised a cunning plan to count Tawaki along their entire breeding range. He employed tourists to take part in an adventurous survey of the Fiordland penguin in some of the remotest areas of New Zealand. Places no other tourist had seen. A pretty good selling point, quite literally.

The “volunteers” paid for the privilege of being part of this survey and spend several weeks on a ship slowly cruising along the shores of Westland, Fiordland and Stewart Island searching the coastline of sign of Tawaki like scat marks, scratches on the rocks or, of course, the penguins themselves. Occasionally they would land to do a quick search of the bush to count number of nests. These numbers eventually were used to estimate the total number Tawaki.

2,500-3,000 breeding pairs. This number is what the IUCN red list uses as the baseline for the Tawaki population today.

Strangely, though, the survey of Stewart Island was limited to the Western Coastline as well as Port Pegasus in the far South; almost the entire east coast was simply ignored. Which, as it turns out, was quite a faux-pas.

In all McLean and his co-authors found a total of 32 penguins around the sourther tip of Stewart Island and concluded that the “limited observations of Fiordland Crested penguins […] suggest that there are relatively few birds there”.

This, of course, is wrong as I know from my own observations while working with Yellow-eyed penguins a few years ago. Hotte and I had seen lots of Tawaki while sea kayaking between our study sites at Golden and Rollers Beach, i.e. exactly the area that was left out in the survey. Particularly Gull Rock stood out because we would regularly see feeding flocks of terns and tawaki in considerable numbers. In fact, whenever we kayaked past Gull Rock we would always see foraging tawaki. 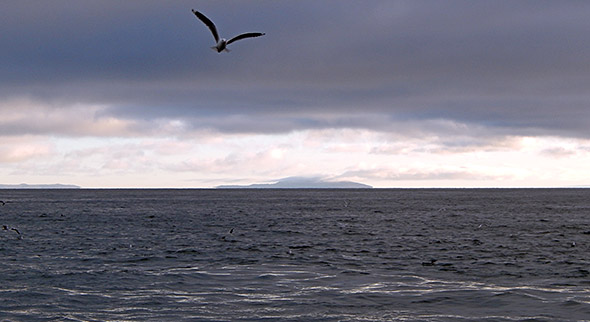 Which is why we are on Stewart Island right now in the first place. And today was the last day of filming.

We went out very early this morning just before 6am. The idea was to be out at Gull Rock for two turns of the tide. The film crew had decided they wanted to be at the rock during slack water in the morning and the afternoon in an effort to get more underwater footage. 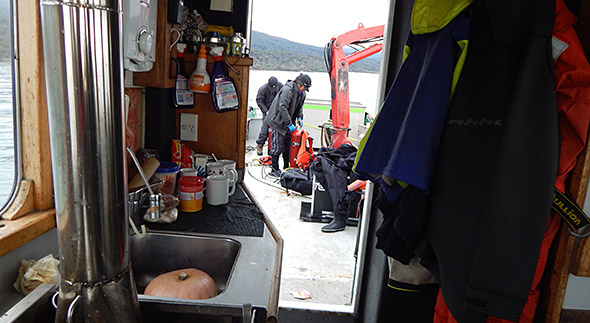 Getting ready for the last day of under water filming

Hotte had come to the island a couple of days ago for a bit of a holiday. But I convinced him that holidays are for retirees and got him to join us on the boat for a day. I decided that we’d do something useful for a change and let us get dropped off at Golden Beach (the site where Hotte and I had worked with Yellow-eyed penguins) which is just a few hundred metres from Gull Rock. I was keen to check out the sea caves in the rocks on either side of the beach and look for Tawaki.

In 2006 when I last set foot on the beach, I had checked out one cave to the South an saw some Tawaki in there. But back then I didn’t really make an effort to find out if the birds were actually breeding in there. Today I was more determined to get to the bottom of this.

When we approached the beach Morgan who was driving the dinghy spotted a penguin on the rocks north of Golden beach. After jumping onto the soft sand I decided to have a look there first. While Hotte started counting the tracks of Yellow-eyed penguins along the beach (10 birds) I clambered across the rocks to where I saw the tawaki five minutes ago.

Of course, I couldn’t get there even though it was low tide. A carpet of slippery bull kelp lined the rocks and there was a trench where the water still stood a couple of meters deep preventing me from getting to where I thought the penguin had been. While I was considering my options I heard muffled Tawaki cries. In fact, they were so faint that it took me a while to register them as such. At first I looked up but the idea of Tawaki scaling a three-metre cliff to breed in the bush seemed rather silly.

Then I noticed a gap rocks coevered in bull kelp. A narrow cave. Perhaps a penguin roosting in there? 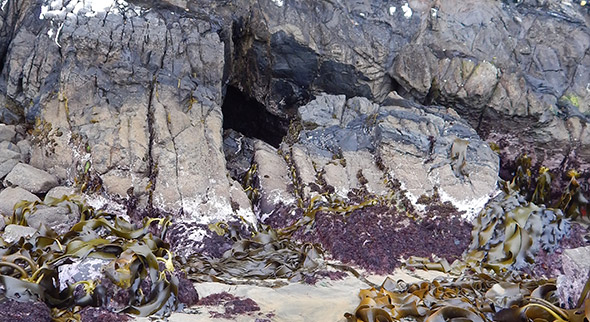 At first sight little more than a gap in the rocks…

I got out my head torch and climbed from the rocks down onto the sand which effectively is the seafloor for the 20 hours outside of low tide. I ducked into the crevasse and noticed green sea weed lining its ceiling. Obviously this cave gets flooded at high tide. I was about to turn back when a Tawaki bark echoed through the darkness – and it clearly originated from the far end of the cave. I climbed up a short slope high enough to clear of water even at high tide.

I looked behind me and saw the narrow cave entrance. I turned my head slowly until I saw them in front of me – little cave men with white bellies wearing what looked like rugged, brown, furry coats. It took me a while to recognise two Tawaki chicks almost ready to fledge in front of me. They were quickly joined by two adult penguins that eyed me curiously. The cave itself continued around a corner. 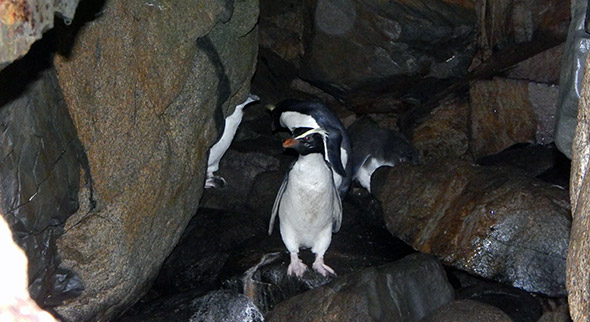 Little Cave Men and their parents

With two chicks there must be at least two nests in this cave.

I remembered one sentence from the MacLean survey publication…

“Unfortunately, our sightings of penguins […] suggest little relationship between the number of birds on a beach or in the water and the number nesting.”

Of course you don’t expect them to breed in bloody submerged sea caves! If you look for conventional breeding sites – like I would have too until today – you will end up with a considerable discrepancy between birds in the open and nests found. 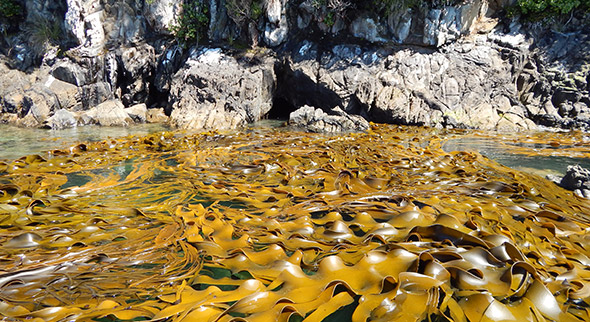 The submarine cave an hour (!) before high tide

But Tawaki take the term “cryptic breeder” to a new level. The cave I was in, was quite suitable to hide a veritable pirate’s treasure. I would have never, ever looked down here if it wasn’t for the calls I heard.

I was – and still am – truly awestruck by these penguins. How they manage to find caves suitable for breeding even below the waterline is pretty amazing. Not to mention that they manage to raise chicks in complete darkness. They must have amazing eye sight. Surely light too faint to be registered by the human eye must penetrate the cave.

Seeing two chicks was enough for me to assume that at least two nests were in this cave. I did not want to cause too much of a stir and retreated rather than pushing ahead to have a look round the corner. I left the cave. I wanted to check the rocks on the other side of Golden Beach.

In the next couple of hours, Hotte and I found and checked five more caves occupied by tawaki on a stretch of no more than 200m of coastline… ranging from large amphitheatres to the narrowest tunnels that even a child could not crawl into. In three of the caves I saw chicks, the other two were impossible to check without a burrowscope or some such. With the two chicks in the submarine cave I saw a total of 6 chicks, although I am certain that there were more in the farther reaches of some of the cave systems.

Now, it’s a moot point to try use our mini-survey to estimate the number of breeding tawaki along Stewart Island’s Northeast coast. But considering the many caves between Halfmoon Bay and Gull Rock I would not be surprised if we had some 50 breeding pairs on that stretch of the coast alone. And that is probably an underestimate.

The MacLean survey recorded 32 tawaki for Stewart Island. If anything this must be an underestimate by at least an order of a magnitude. If not more. 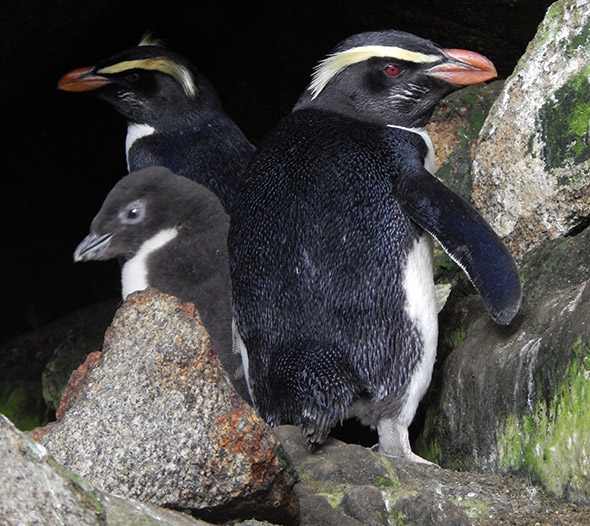 « Catch me if you can
Back to Dunners »