I know I keep repeating myself, but I hate when the weather forecast is right. For today they forecasted torrential rainfall. And in the afternoon we got it. Big time.

I arrived at Jackson Head around lunchtime and met Sam at our base on the rocks just beyond the penguin highway up to the Apartment Block. He was excited about something and he told me what it was.

The first chick had fledged at 10.30am this morning; and Sam was the only one to witness it. But not only that, what he witnessed was bloody interesting too. Because he saw the chick leave the shore together with a pair of adults, a male and a female. Moreover the male and the female seemed to be encouraging the chick to take the dip.

“Looked like mother and father”, Sam said as he got out his little Canon camera. He had taken photos as well as videos of the scene. And when I saw what he had recorded I could not deny the fact that he might as well be right.

The male would sometime peck the chick, but in a rather gentle, non-aggressive way like haven’t seen it before. And all the time the three birds stayed together. Then the chick took a false step and toppled of the rock. The female craned her neck looking down to the chick as if she was concerned like I have seen it before in Snares penguins when an egg or chick rolled out of the nest bowl. The chick eventually got back onto the rock and was washed off by a wave. It swam at the surface towards the horizon. The male and female jumped in after it and eventually joined the chick maybe fifty metres from the shore. According to Sam, they then swam out together, always at the surface until they disappeared far out at sea.

“Do you think they teach chick to forage?” Sam asked me.

“If it was indeed mum and dad, why not?” was my reply. The thought was pretty damn cool.

In penguins parental care generally ends with fledging. The chicks have to take the big dip alone. Except for Gentoo penguins, where it has been observed that the parents join their offspring on the first big outing.

And to be honest, in a way it makes sense for the parents to try everything they can to help their chick get along in the ocean. Like all crested penguins Tawaki only raise one chick per season. So it’s the one shot they have per year. Since crested penguins tend to start breeding at around five or so years, they might be able to produce nine, ten chicks in their lifetime. And not all of them will survive to become breeders. So every push, every tip parents can give their young will improve its chance of survival – and the perpetuation of the parent’s genes in future generations.

We really should have a look at this phenomenon next year.

I headed up to the Apartment block where really nothing was happening. The cave was crammed full of penguins. Six chicks ranging from fluffy downy ones to big ones fully moulted into their fancy blue and white feather suit were in there. On top of that I counted six adult Tawaki. All seemed to be waiting for something to happen.

What I also noticed was that they did not seem to care much about my presence when I peeked into the cave. A few weeks ago penguins would have started to clamber up the rocks to get to the far end of the cave, away from the horrible creature that was shining a light at them. Today they just looked at me not moving. I guess the constant presence of a camera man in the past two months helped them to get used to our presence. In fact, one of the chicks could not contain its curiosity and inched closer to me and my camera.

The film crew packed up just after lunch and headed back to Haast, red-eyed and positively looking like Zombies. The early morning hours of filming certainly take their toll. I on the other hand had slept until seven and was ready to assume my post in the tent hide.

By 4pm a rain had set in that made yesterday’s rainfall indeed look like drizzle. It was like Jackson Head was put under a waterfall. Of course, the bruised and battered tent hide was not rally built for this kind of weather so that after a short while through hundreds of tiny holes in the canvas it started to rain inside the tent. Paired with the fact that it was cold I was in for a very miserable afternoon.

At around 3pm a lonely Tawaki made its way up the path. When she spotted the tent she stopped in her tracks and started to inspect the strange object just next to the route she intended to follow. 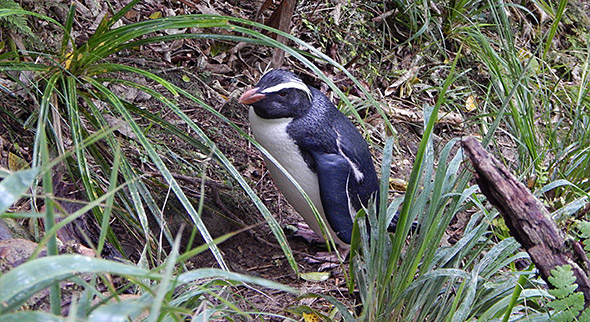 After about 10 minutes of looking she suddenly fell asleep, right there and then. With eyes closed she stood in front of my tent occasionally scratching herself behind an ear with her foot, shaking her body sending water drops flying in all directions or flapping her wings briefly.

After an hour she woke up, shook her head, eyed the tent and was on her way.

By now I had to make a decision: weather it out and stay until 10pm or pack up and leave now. Because it was only two hours until high tide. I surrendered to the weather, packed my stuff and left.

It felt like a defeat even though I think it was a sensible thing to do. Several hours in this weather, wet, cold and without anything else to do but sit and wait was a recipe for hypothermia. But of course tonight could be the night that the logger bird finally shows up. Or not.

At the end of the day it was the right decision. Because for what could be the final time, I had dinner with the Japanese film crew at the hotel bar. Two more days and we’re out of here, off to Dunedin.