Boy, it’s cold today. I am sitting in my tent hide – this time with a small camping chair and not one but two Vapor repellent doodaddies that magnificently keep the sandflies away. But it is cold. 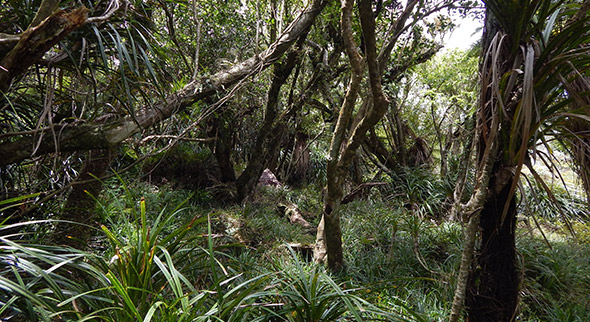 They have forecasted a change in the weather which will bring rain towards the evening and will develop into heavy rain all day tomorrow. I hope they are wrong about this.

Ida-san has changed his strategy. His team now operates in shifts, with Haruki-san, Ida-san and Sam covering the morning shift from 2am to 11am while Hongo-san and I will keep watch – each at his own spot – from 11am until 11pm.

What Ida-san and his team are hoping to film is the actual process of fledging. Half of the chicks at the apartment block have shed their down and look like fully functional penguins now. Granted, their plumage has a blue-grey hue to it, their crests are little more than a faint line of pale, yellow feathers over their eyes and their bills are black. But they seem to match their parents in size and built. So theoretically they could go. 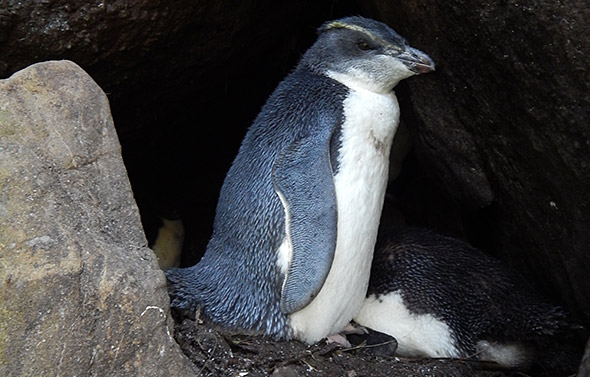 Unfortunately, they don’t seem to feel the inkling to do so just yet. Which adds to Ida-san’s worries as he needs, to use his own words (translated by Sam), “fledging, otherwise no story”. However, they’ve been quite lucky so far, and I am sure that it will work out for them in the end. Who knows, the chicks might fledge any minute.

So while Hongo-san waits for the chicks of the apartment block to make their move. I sit and wait for the logger bird from JH06. And I am worried too.

Not so much that the birds might not return (or rather continue to elude me); that’s a possibility I have accepted three weeks ago. No, what I am worried about is what happens if I actually see the bird going past my tent. Because sitting in here and waiting is one thing. But getting out quickly to capture the penguin before she has disappeared under a kiekie thicket is a whole different thing. Yesterday, for example when trying to get into the tent I nearly skewered my left thigh on a rotten piece of wood that sticks out of the slope at just the right angle. And getting into the tent is the easy bit.

I actually tried it out earlier. It takes me a whopping 15 seconds to open the zipper of the tent flap, wriggle my way out of the tangle of canvas and strings, avoid the piece of wood (no, I could not break it off, I tried, believe me) and get out onto the penguin path. I probably have to use the stealthy approach of slowly and quietly opening the zipper, carefully exiting the tent and then sneaking after the unsuspecting Tawaki.

Will that work? I honestly don’t know. I guess, no, I hope we will see.

6.30pm: Another six and a half hours gone without anything in particular happening. Three penguins have gone up the hill, none with anything attached to its back. 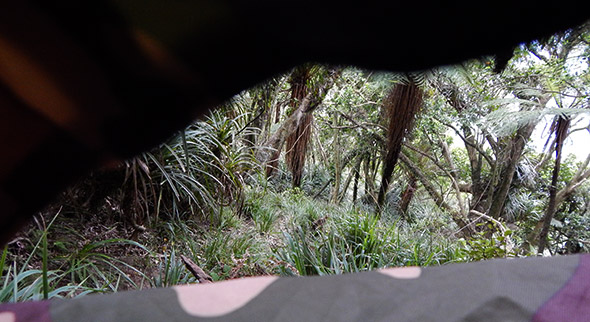 The view from the tent hide of for about 9.5 of 10 hours of waiting for tawaki

About an hour ago I spotted two Tawaki a bit downhill from my tent hide climbing onto the trunk of a large tree that arches at a precarious angle from the slope. While it is probably the first tree to fall in the event of an earthquake it is also privileged to be climbed by Tawaki.

Sitting perched on the tree for a while, the two reminded me of my time on the Snares where non-breeding penguins would also scale leaning trees, some of them three or more metres above the ground. Better still, in the 1970s John Warham actually found a Tawaki nest in a tree 10 metres in the air. And here at Jackson Head no less. Maybe we’re looking in the wrong places when we search for Tawaki nests? (As if Stewart Island hadn’t answered this question already…)

Well, another 3 and a half hours to go.

Traffic certainly picked up when it started to get dark in the forest. Had there been just the odd penguins for most of the day, now the counter started ticking up to a grand total of 14 penguins. None of which carried a GPS logger.

Just before 10pm Hongo-san had enough. I had enough as well. And since it started to rain we decided to pack up and leave an hour early (we were supposed to stay until 11pm). By the time I teamed up with Hongo-san just below the Apartment block, the rain reached a strength that “I-don’t-mind-the-rain-but-I-hate-bloody-drizzle” Morgan would have approved of.

By the time we were down on the rocks and started this evening’s boulder hopping exercise, it “rained strings” as they say in Germany. Only thath here they strings lashed at us horizontally.

And to make matters worse, the batteries of my head torch died on me. No problem, I though and got out the spare batteries. These were flat also. Nevermind, I thought, and I rummaged through my bum bag to get the spare head torch out. Of course, Murphy’s Law had to have a go at me, because the batteries in my spare torch were also spent. So in the dying light of two head torches I had to find my way across the rocks (Hongo-san only had AA batteries when I needed AAA. Thanks, Murphy.)

That I made it back to the car and hotel without any broken limbs is a minor miracle.

« My friend the tent
The Wait »