Fledging? Yes, but No.

I wanted to get a reasonably early start out at Jackson Head today. I was really keen to have a lookout for fledging chicks on the shore for a few hours, just to see if I would be able to observe a similar “family outing” that Sam had observed yesterday.

I got to the Head just after 9am, some 7 hours after the film crew had left the Hotel. When I approached the study site, I could see Haruki-san with his camera perched on one of the rocks below the base. He was pointing his lens up towards the creek and I could only assume that another fledgling was in the process of making his way to the water for his big splash. 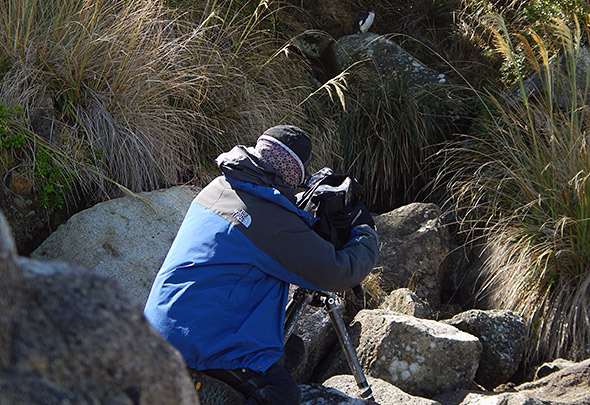 Haruki-san with his lens on a slightly confused fledgling

And indeed, there the bird was. It looked positively unsure where to go and what to do. And unlike the fledgling yesterday which seemed to have been guided out to the sea by some adult tawaki that may or may not have been its parents, this one was all by itself. 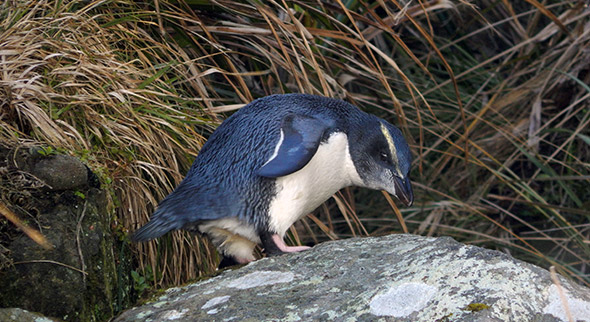 Fledgling on its way somewhere

The young penguin scratched his bottom. Then it flapped its wing. It turned around, looked up the hill, turned once more, looking down at the sea… and decided to scratch its bottom some more. 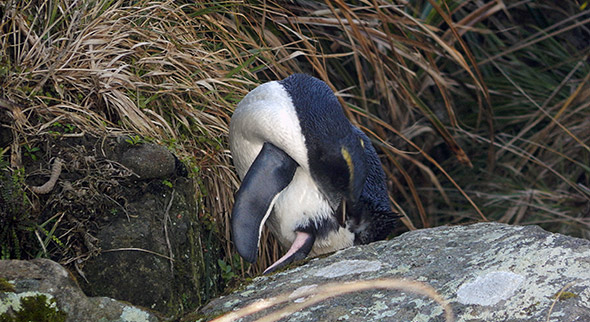 Trying to scratch that itch

Once more I found Sam slouched down in his folding chair between the rocks at the Base, trying to catch up on some sleep. He was wearing his mosquito net hat to keep the Sandflies at bay. As an Australian resident I would have expected a cork hat, these hats with wine corks dangling from the brim, but then again he’s Sam, not Bruce…

I made my way up to the apartment building and found Ida-san snoring inside the director’s tent while Hongo-san patiently waited behind his camera without any sign of fatigue. After a quick peek at the happenings in the cave of the apartment building (one adult tawaki and six mostly moulted chicks being bored stiff) I meant to head over to my observation tent for a few hours of waiting. But instead Ida-san stirred and crawled out of his tent, his eyes red and bleary.

“Thomas-san. This afternoon I would like to use multi-copter. Is that okay?”

A while ago, when we were still having beers at night, Ida-san had talked about his adventures with flying drones to get aerial footage. The crew has two of the quad-copters with them, each equipped with GoPros mounted with gimbals (http://en.wikipedia.org/wiki/Gimbal) to the base. When I asked why two units, Ida-san casually replied “Oh. In case we lose one.”

“When we were filming bower birds in Papua New Guinea a few months ago, I lost one. I flew it over the trees and then it just disappeared. Never found it.”

So, there’s an expensive multi-copter with an even more expensive gimbal and a GoPro lying around the Papuan jungle somewhere. I’ll keep my eyes peeled next time I’m up there (if ever).
Ida-san indicated that he would like to work with the drone around lunch time. Apart from the fact that it was my responsibility to oversee such activities I was far too curious not to witness that attempt. But first, I was to meet with Paul Elwell-Sutton from the West Coast Penguin Trust around 1 pm to pick up the trust’s trail cameras. But I was sure Paul would be curious to observe this novel style of film making.

Ida-san and I agreed to give it a go around 2 pm.

Now I am spending some time in the tent hide. So far two tawaki went past me; none had an extra package on its back.

Paul,  Sam (whom we met down at the beach) and I made it to the apartment block just after 2 pm. Down on the beach not a lot was happening. In fact, we had sneaked past Haruki-san who lay spread-eagled on a rock having a bit of a nap in the shade of his camera tripod. At the apartment block itself, also nothing happened. Although I have to admit I was amazed to find Hongo-san sitting patiently in exactly the same position I had left him more than two hours ago.

Ida-san wanted to go up the hill and find a bit of a clearing. The wind had picked up and he wanted to give his drone-flying skills a bit of a refresher. So we climbed up to Hilltop which by now seems pretty deserted. Hardly any signs of chicks or breeding adults; they must all moved on down the hill in anticipation of fledging. 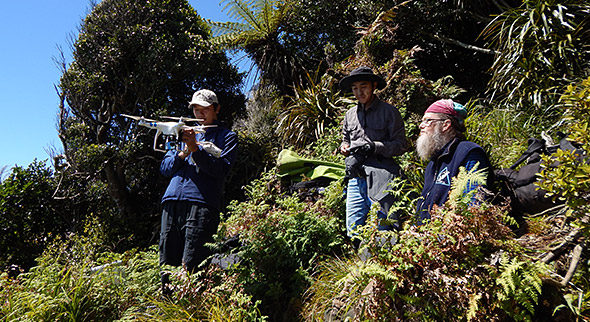 Ida-san, Sam & Paul on the Hilltop clearing for the drone practice runs

The drone flight attempts turned out to be pretty average. Ids-san seldom managed to keep the drone up in the air for more than a few seconds before a wind gush pushed it into the vegetation which sent it crashing down to the ground. Remarkably robust these drones!

Ida-san gave up after ten minutes remarking: “Too windy. Tomorrow.”

Considering it’s our last day tomorrow we better hope it’s not as windy.

Paul headed back to town, Ida-san & Sam joined the rest of the team to call it a day. And I resumed the watch in the tent hide.

It’s getting darker outside as I am writing this. Outside a lonely tawaki is sitting in the kiekie not quite sure what to make of the tent hide flapping in the breeze. It’s one of three more logger-less penguins I have seen this afternoon. I think I’ll head back to town once this fella has decided to move on.