My friend the tent

I am back inside an old friend, the stalker’s tent hide we used to recover the last two loggers. Surely, the camouflage tepee is a good omen, a talisman of luck. It is not quite as comfy as I don’t have the chair nor the room for one. I’m sitting on a flat stone looking out of the half opened flap of the tent downhill onto the forest path.

It is almost 3pm so I have spent the last 3 hours in here already. In all that time one Tawaki has come past my hide-out, a shy female inching her way down towards the coast past the tent without a logger on her back.

The sun is out today, but it is quite windy and the sides of the tent shake quite a bit.

And without anything happening outside I’m rather bored. I pour myself another cuppa from my thermos flask and raise the cup.

If I only I could believe that though. I’ve got the feeling that today will turn out to be very, very quiet day. Because when I came out just before lunchtime I hardly saw any penguins. All in all I counted four birds, three of which were youngsters hanging out under a rock together, when in the past weeks there were always 10 to 20 penguins at any time of the day.

When I met Sam at the base on top of the rocks, he told me that it has been super-quiet all day, including the early morning hours. Yesterday he spotted in his own words “soooo many pengins going out” (Sam always calls them “pengins”) but today “maybe two, three”.

It seems all the birds have left yesterday probably falling for the irresistible call of food wafting as a scent down with the wind from somewhere out at sea. Then again, the wind is blowing from the South whereas logger data so far suggest that the birds tend forage to the North.

But who knows, maybe the birds also have heard the weather forecast which predicts pretty rotten weather from tomorrow on so they might all return tonight. It’s certainly a thought that helps me keeping my faith that there is a chance to get the last logger back.

And there’s another ray of light on the horizon. While sitting here in the tent I finally had the time to go through the data of the camera we have operating at JH06. And just as Haruki-san said, on 27 October there she is, logger bird at the nest reunited with husband and child. 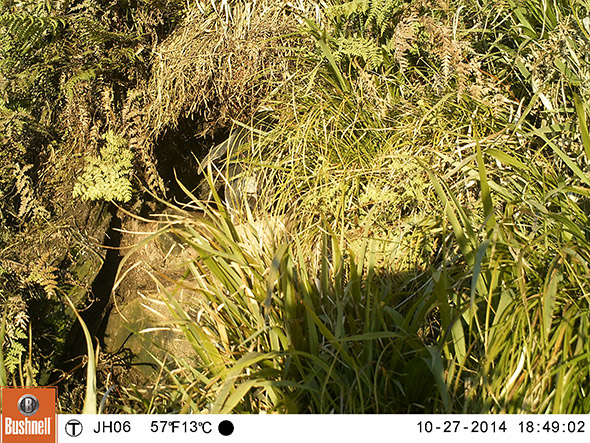 The logger bird returns (yes, there it is, behind the grass, believe me)

The chick returned to the nest almost every night since then if only for half an hour. And on five days there were adult penguins with the chick. The last family gathering occurred two days ago around the time when I was heading back to the car park. So I’ve missed her by a heartbeat! D’oh!

But, and here’s the aforementioned ray of light, she did not return to the nest last night while the male and the chick showed up even this morning. On top of that there is a hungry chick begging what looks like its father for food but he just shakes his head as if to say “Wait till you mother returns.” And I have a hunch that chick and father belong to the logger bird. So she will return soon.

Two hours and three penguins going uphill and one going downhill later I am still waiting for the logger lady. At the moment, a rather plump female has made herself comfortable about 5m below my tent hide. She takes short naps, preens or scratches herself behind her ear with her short legs or, from time to time, trumpets a lonely solo. Surely if she were a breeder she’d show more determination to go up the hill. So even though I haven’t seen her backside yet I am more than sure that this is not the bird I am looking for.

An hour ago, however, a female waddled by with the determination of a breeder. She was rather wary of the tent but she nevertheless carried on up the hill. The amazing thing about her was that a large chunk was missing from her left flipper. Right in the centre of the flipper an oval gape extended all the way to the bone. It is an old injury healed and all. I wonder how she sustained it, or to rephrase that, what creature had literally taken a bite out of her. In terms of size, shark et al seem out of the question. This brings back the old placeholder the Barracouta.

But what would a Barracouta do with a penguin? Firstly, I don’t see how a fish of the size of a Barracouta could kill a penguins – so why try? Of course, Barracouta could hunt in groups and it could be a team effort to dispatch a penguin. This, secondly, raises the question why penguins sport mostly single “Barracouta” injuries. Something doesn’t seem to fit with the Barracouta theory… 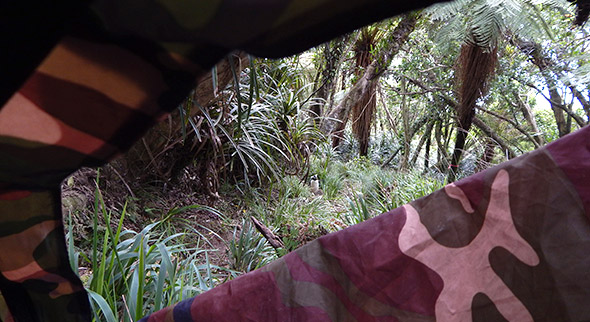 The view from the hide. Note the sleeping tawaki that prevented me from going to the bathroom for more than an hour.

Well, it’s 8pm and the number of penguins that have gone past my hide out in six hours is meagre. 4 penguins have gone up since 2pm. That’s three more than yesterday, so I shouldn’t complain. Problem is that one of them is fast asleep just outside my tent hide – and I need to go to the loo. Granted, if I set foot outside the tent the poor fellow will get the fright of his life. So I’ll just stay where I am for the time being. Maybe if another penguin shows up he will move too. 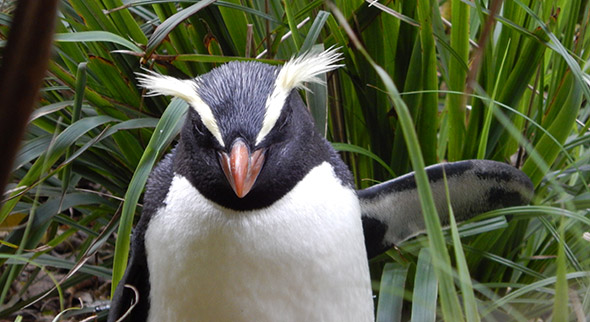 The snoring tawaki the kept me from going to the loo.

I have spent the last couple of hour reading Lloyd Davis’s “Professor Penguin”. The book is kind of the scientific memoirs of my former supervisor. It’s a great read for anyone interested in penguins. Lloyd has gone to great lengths to cover the many interesting aspects of penguin biology and weave in his field work experiences. He has met, worked with and was influenced by a great many researchers, ranging from the Elvises to Justin Biebers of penguin science. He features biographies of the researchers he considers most influential for him and just reading these short bios of people I have met and know personally is quite enlighening. Just goes to show that even if you think you know a person you have merely scratched the surface.

But the weirdest thing is to read about all those researchers and their work – catching a glimpse of penguin science as an outsider, so to speak – and then I look up realizing that I am sitting in a tent hide waiting for a penguin with a GPS logger to return while outside four Tawaki carefully tiptoe uphill.

I left the forest a few minutes short of 10pm. All in all 16 penguins made their way up to the Hilltop area today. None of them bore a GPS logger. But despite having sat in the bloody tent hide for more than 10 hours today, I felt good.