At 2.30am I heard the Japanese crew leave the hotel. I happily turned over and continued to dream of sleeping penguins.

When I reached the base below the apartment block around 10 hours later I found Sam sitting hunched and apparently fast asleep on a camping chair in the sun. He jumped up when I said “Hello!” looking around bewildered as if he didn’t quite know where he was. Yup, it was a short night and a very long morning for the guys. And a miserable morning too because not only was it bucketing down when they had to negotiate the rocks in the middle of the night, but it was also high tide so that they had to climb most of the way. As Hongo-san put it  when I spoke to him “We were like Super Mario. I lost three lives. At least.” Yes, I can picture that.

And no chick had fledged but loads of juveniles crowded the now sun flooded shoreline. 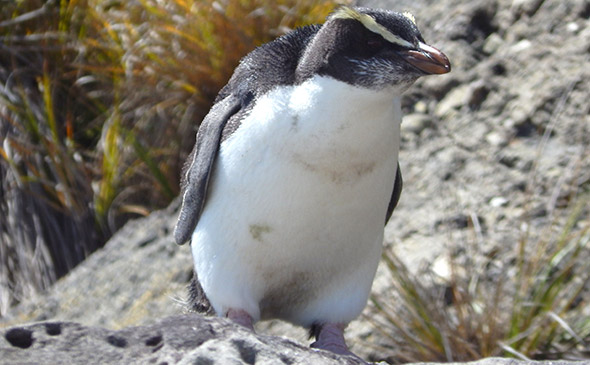 Despite the grey beard, this tawkai is just about a year old

Haruki-san was up on the track below the Hilltop, this time filming penguins leaving their colonies. The logger bird he did not see.

While I spoke to Haruki-san – or rather communicated using a strange form of sign language – I heard quite a racket form up near JH06. Had the logger bird returned?

As fast and quiet as I could I climbed up the hill. But, alas, it wasn’t the bird I was looking for. Nevertheless I had quite a show in front of me. A pair of Tawaki were performing an extended trumpet concerto which eventually lured their big chick out of hiding. What followed was a feeding chase with the chick running after mum who obviously did not feel like regurgitating food just yet and started running away from her hungry offspring. In fact, the two of them kept on circling a lump of grass. After each successful loop, mum would stop and regurgitate food for the chick before continuing the wild goose chase for another round. And dad supplied the soundtrack to the show, trumpeting his heart out. 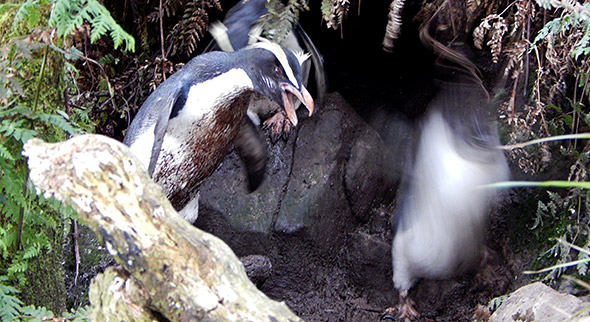 On heck of a racket: mum and dad’s trumpet concerto which sends their chick off like a rocket

“Hang on”, I thought “What was that?” While singing the male stretched his body with his bill raised high and his flippers outstretched. While mum and kid came running by he turned to follow their progress and revealed his left flipper to me. He was banded.

A band on a Tawaki? Have they ever banded Tawaki? I thought DOC had used transponders to mark the population during their monitoring programme in the 1990s…? But this one was clearly banded. What was the number?

Frantically I searched for my binoculars. But yesterday I had already realised that I had forgotten them in Dunedin. Blast it! So the camera it had to be.

I don’t know how many pics I snapped – a lot – but eventually I got one that revealed the band number – 1179. If this band came from the same series that was being used on Yellow-eyed penguins this must be a really old bird. But YEP bands are far too large for Tawaki, so I suppose there must have been a Fiordland penguin specific series of bands issued. 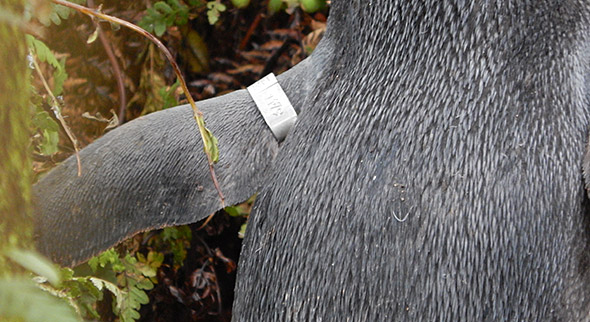 The flipper band on the male Tawaki; it actually reads RH1179 (RH for Rockhopper)

I will certainly try to find out who this guy is.

(It turned out that the bird was banded in 2000 as an adult on Munro Beach some 50km North of Jackson Head. So the penguin is at least 16 years old).

Interestingly, while I was busy trying to snap pics of the band, momma penguin had disappeared into a nearby burrow leaving kiddo and daddy behind. Kiddo, ever so hungry as a chick getting close to fledging should be, started begging dad for food. He stopped trumpeting and indeed regurgitated a good number of meals for the chick.

In other words, both mum and dad arrived together. And both fed their offspring. Another indication that in the later stages of breeding pairs might go out foraging in tandem.

Before assuming lookout along the forest track up to Hilltop, I once more went down to have a chat to Ida-san. The crew was about to go back and call it a day. It was past 4pm and they have been up since 14 hours – and they looked the part. Ida-san squinted at me through small, red eyes looking like he was about to keel over. His plan is to come back again next night and hope that one of the chicks from the apartment block would fledge in the morning.

And fledging is indeed imminent. There are quite a good number of chicks around that are wearing their new penguin outfit of shiny blue-black feathers with a hint of a pale yellow line running over their dark eyes. Their bills are still black and will only over the course of the next one or two years to turn to the reddish-orange colour of an adult tawaki’s bill. 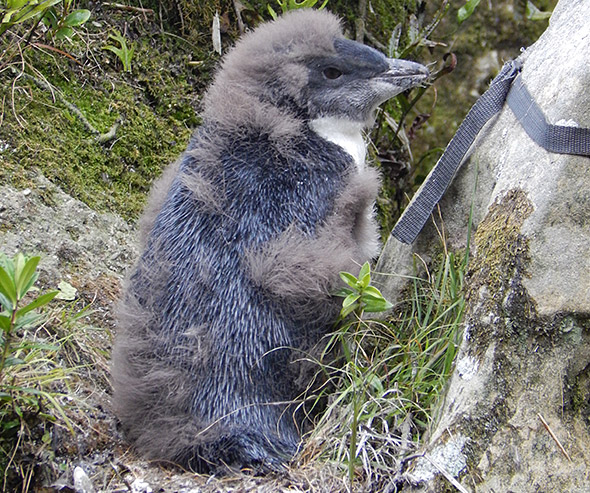 Not quite ready to fledge, but this chick is definitely getting there

I spent the next four hours sitting on a tree waiting for penguins to come up the forest track below hilltop. But except for one bird that actually climbed up the steep slope, only a handful of Tawaki that were making their way down the hill presumably out to sea. There was just not a lot happening tonight.

« The last week begins
My friend the tent »