And so begins the last week of Tawaki filming. With a long, long drive from Dunedin to Haast.

I actually made it to Haast in a bit over five hours only to find that I left the sunshine behind and dived head first into typical West Coast weather. I quickly checked into the Heritage Hotel, geared up and was just about to leave for the Heads when I spotted Sam sitting in his hotel room.

It turned out that the Japanese film crew took a break today; the weather was abysmal and they decided to do night shifts from now on. Leaving the hotel and 2am to be ready in the penguin colonies if the first chick decide to fledge in the morning.

I actually agree with the idea that it is more likely to film fledglings leaving in the morning, when the majority of adult penguins also take their leave.

Well, I’m after a logger penguin that might still be running around on Jackson Head. So I told Sam that I would be out till late and therefore would join them sometime in the morning tomorrow. 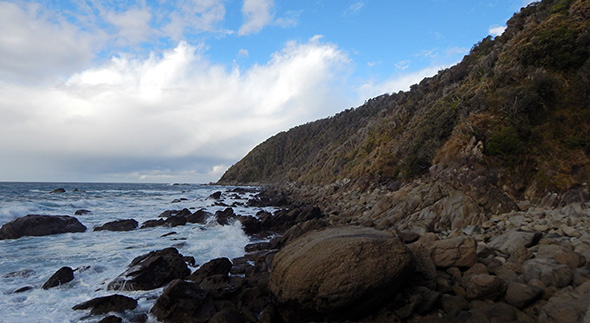 Less than an hour later I arrived at the Hilltop beach access. On my way across the rocks I came across many juveniles. In fact, most of the penguins loitering on the rocks this evening turned out to be juveniles. Very few penguins in adult plumage were present. I guessed that most of them were somewhere up in the bush. I climbed up the creek to get to nest JH06. The sun peeked through a hole in the clouds and illuminated the Hilltop in golden colours. 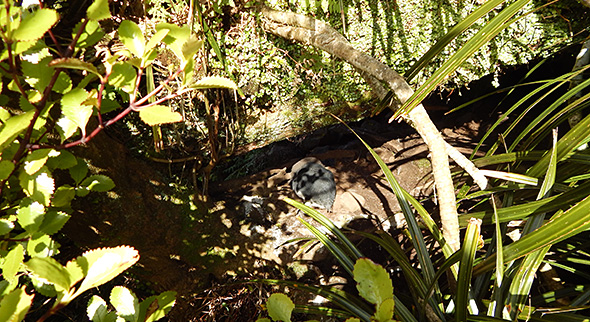 …in a nice and cosy sun spot…

On a narrow mud ledge under a fallen log, in a nice and cosy sun spot, I saw a penguin bum minus the typical long tail feathers. Further up the massive body patches of brown fluff quivered in the evening breeze. The bird lay flat on its stomach, the flippers tightly tugged onto the belly, the head slightly raised. I just love to watch penguins that are fast asleep. 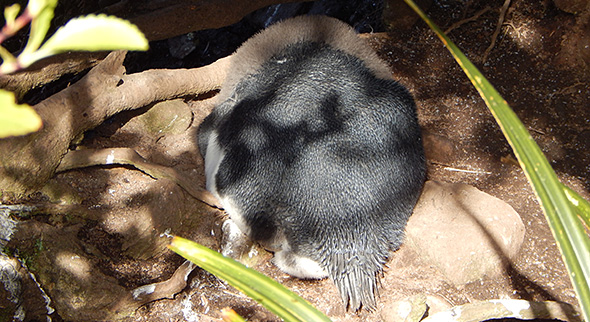 This one was a chick that by the looks of it wasn’t far from fledging.

An adult sat upright hidden in the kiekie not far from the chick, its bill pointing skyward with its eyes closed, also fast asleep. The gentle rumble of the surf, the whispering breeze and the setting sun… this was pure serenity.

I enjoyed the moment a bit longer, then when I was about to quietly retreated down the hill junior got up, stretched and shook is upper body, sending down flying in all directions. Then it hunched down, spotted me and remained decidedly undecided where it was, just looking me up and down. I couldn’t resist and remained a few minutes longer. 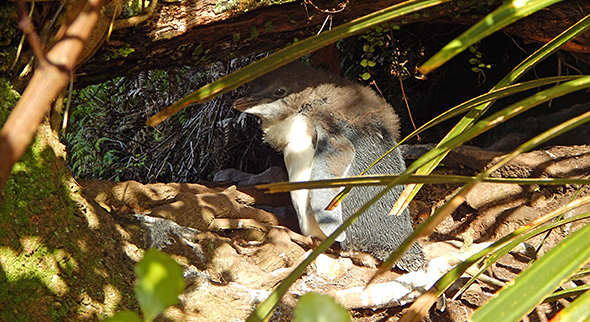 “Who are you and where did you come from?” 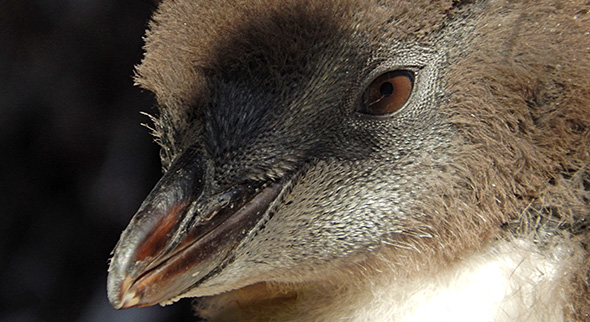 “Here’s looking at you, kid”

I spent a couple of hours not far from where Haruki-san sat when he saw our logger bird coming up the hill. Needless to say, it didn’t show up while I was there.