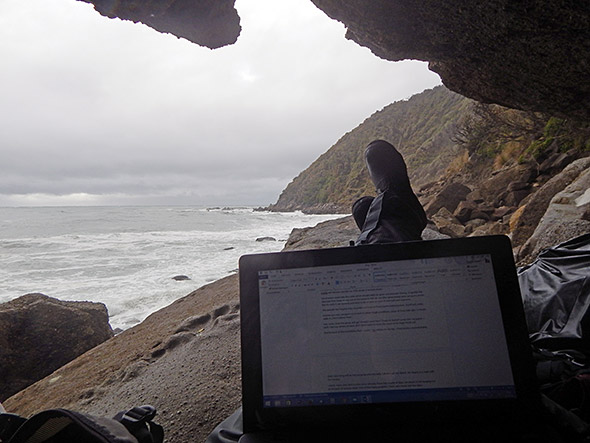 My view from the cave. Of course the rain had to stop briefly while I was taking this image.

I’m not sure if I’m sitting or lying in this narrow cave in the rocks just below the ropes up to the Apartment Block. It doesn’t really matter because it is uncomfortable. Luckily I have an entertaining companion. A juvenile tawaki has joined me and takes an interest in my Oringi jacket, which is soaking wet because outside our little abode it has been bucketing down for most of the day. From huge buckets, I might add.

Outside our cave, penguins try to land in rather rough conditions; some of them take ages to finally make it. I don’t blame them. 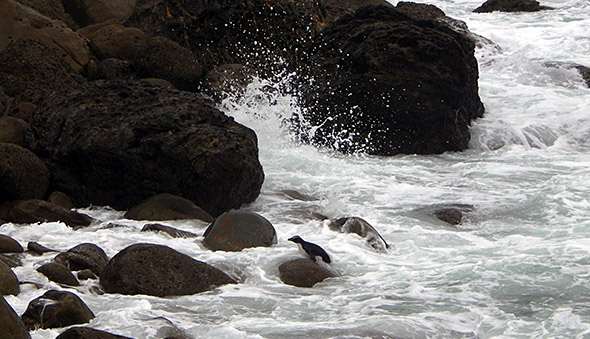 Tawaki always try to land halfway between break and surge of a wave. This one almost made it.

Good waves crash onto the rocks which should make for dramatic filming by the Japanese film crew. Originally the idea was that I keep an eye out on the ocean to tell Ida-san (the cameraman) when penguins arrive. But his radio is not working and mine is out of juice so I just sit and wait and supervise. And enjoy the company of the young penguin.

Even though he’s just over a year old, his size and his considerable honker identifies him as a male. Despite his butch appearance – quite a fitting name, Butch –  his behaviour is positively child-like, all curiosity, carelessness and a bit of clumsiness. 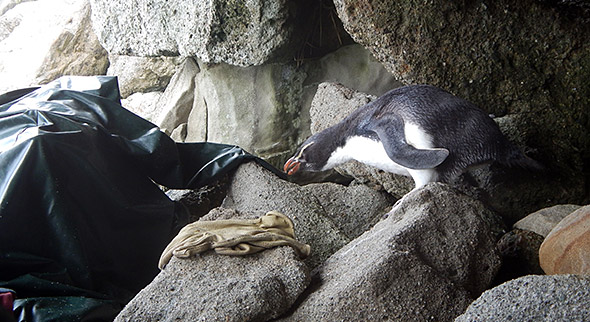 Butch nibbling on my rain jacket.

I think I have seen Butch a few times already these last couple of days. He seems to be hanging out in this part of Jackson Head. One of the many juveniles I have seen since returning to Jackson Head. And now he’s disappearing through a crack in the back of our cave. See ya, later.

It’s going on 6pm, so roughly another 2.5 hours to sunset and another 5 hours until we head back to town. Hongo-san will again try film the nightly chick feeding and socialising up at the apartment block. If it is not raining I will again assume my place up in the tree above Hongo-san’s hide tent and enjoy the show.

Butch comes back. For a member of a species that is said to be very timid and does not like the presence of humans, Butch is rather oblivious of this fact. He is again busy with my rain jacket and finally loses interest, wanders around my legs and hops out of the cave.

The beach has become rather busy now with penguins landing in a considerable surf, like getting out of a washing machine that’s running its main cycle. Most of the birds then clamber up to the rocks just below Butch’s and my cave. 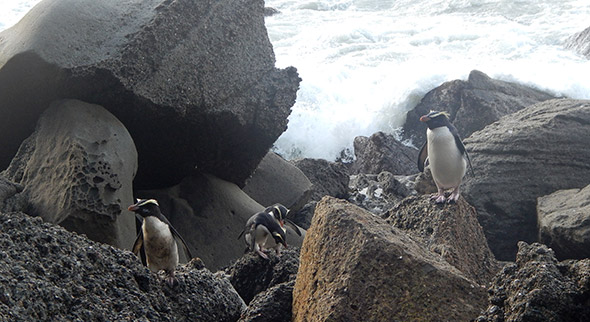 Penguins outside of Butch’s and my cave

That strange thing is that the penguins do not seem to notice me even though I am in clear view a mere meter away from them. If is because I am lying on my back or is it the notebook that hides an important feature for them to recognize me as a potential threat?

Rather than doing their usual alert head bobbing the birds just stand there and preen before heading off further uphill.

Now here is an interesting visitor. He – another male by the looks of his bill – has arrived on the scene. At first I thought I had a discoloration of his check feathers on the left side of his face. But upon closer inspection it turns out to be scar that runs in a slight arch and is about 5 cm long. I’m not sure if the missing feathers are an indication of a recent injury. But, hang on, he just turned a bit so that now I see his left flipper and there is a rather knotty scar at its base. The penguin straightens his body and shakes his head sending many little droplets flying around. He flaps his wings quite normally so no permanent damage to his flipper. 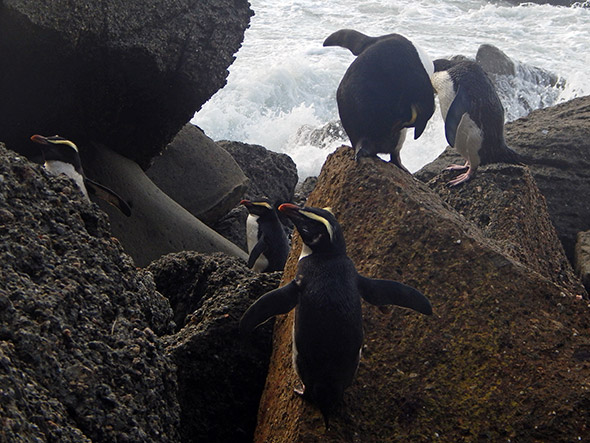 The bird looks positively rugged, like a veteran of a lost battle. There you have it, a second time today a name pops into my mind. Ahab.

I am usually not the type of guy who gives his study subjects names. To me this is something you to someone or something that is in a way yours, like your kids or a pet. I admire the penguins I work with and I may feel really close to individuals I am in contact with for weeks on end. But they are not “mine” (that’s also why I always try to avoid to call the birds I work with “my” penguins).

He relaxes, presses his flippers to his body and actually starts to doze off. And now I can see both the scar on his face and his flipper and it seems that both form opposing arches – bite marks most likely. What could it have been? A shark? No, they have razor sharp teeth that cut very clean and do not leave such knotty scars like the one on the flipper. No, my guess would be either a sea lion or a fur seal.

But this one is just Ahab. Although I doubt that this penguin holds a manic grudge against his attacker but is happy to be still alive without an urge for revenge. In fact, it looks like he’s having a snooze at the moment.

Thinking about it, Ahab must have had a run in with a fur seal. A sea lion would have finished him off with the first bite. But fur seals are generally not interested in penguins. Except when the birds are in their way.

On the Snares I once observed a fur seal that had particular rock in mind to have a nap. Problem was the rock was occupied by a Snares penguin that did not want to move but rather hissed at the fur seal. That, of course, was a bad idea as the seal simply grabbed the penguin by its head. But rather than gulping it down it just flung the penguin to the side and send him tumbling down the rocks. It looked like the animal version of dwarf-tossing. The penguin eventually got up and shook his head a couple of times and waddled off in a way that suggested he was mumbling curses and insults into his feathery beard as he left the scene humiliated.

Despite this, I still think Ahab is a good name for him.

Okay, I all alone now. And it is almost 7pm, so let’s head up and enjoy tonight’s play at the Apartment Block.

The play turned out to be extremely boring with nothing happening. I had assumed again my lookout in the tree above Hongo-san’s camera but all I watched tonight was mud oozing out of the cave in which the crèche of chicks was probably huddled together and fast asleep. A possum climbed down towards me getting one hell of a shock when it saw me. I guess human encounters in a tree are not every day business for a possum, least of all for one from Jackson Head West where human visitation is generally low.

To film something, Hongo-san turned his camera at the possum. And just to ruin his day a bit more all the possum could think of was to climb along the branches where the thick green and orange camera cables were tied up, looking like cyborg vines. “Hmm, not very natural” he said to me after the marsupial had disappeared into the night.

Because nothing else happened the wet and the cold started to creep into my bones. It seemed like ages until Ida-san finally called it a day and we packed up and headed back to town.