Sitting on a desk all day is quite nice sometimes, but usually I prefer field work. A lot. And today was a prime example why that is so.

For most of the day the weather was gorgeous. Hongo-san was back in business, the two Ida-san’s and Sam were back from filming Tawaki swimming in creeks. Today they wanted to get footage of penguins landing on the beach and making their way up to the colonies.

Of course they are lucky as at the moment, a lot more penguins land on Jackson Head than there are breeders. That’s because a lot of young birds – juveniles and pre-breeders (according to Warham Tawaki start to breed when 5-7 years old) – are returning from almost 10 months at sea. So the traffic on the beach is considerable.

The two Ida-sans have moved a bit further along the rocky shore to one of the busiest landings some 200 metres past our rope ascent to the Apartment block. At first I wasn’t sure about them filming there as there seemed to be an awful lot of fur seals there. But when I checked the area I could confirm that these were just male animals that had a rest in the spring sun. And pretty much unlike your ordinary fur seal, they did not mind the camera man and documentary director at all. Instead they actually posed, staged a bull fight and generally gave the guys a great show to ban on film (or rather hard disks).

I spent most of the afternoon sitting high up on a rock overlooking Jackson Head West. Had the penguin traffic in the previous weeks been a bit slow an restricted to the main colony access points, the Tawaki now landed around us anywhere and at any time. As far as one could see we’d spot penguins preening, hopping on the rocks or just dozing in the sun. 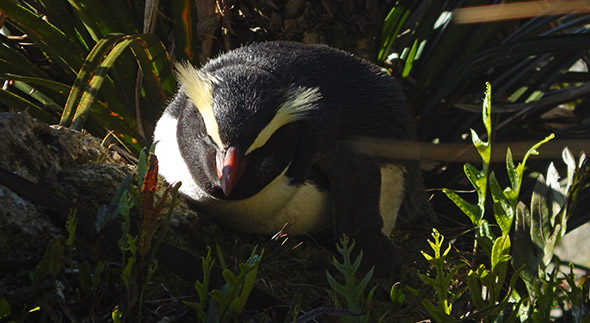 Dozing in the evening sun (actually, this guy might be fast asleep)

As it was getting darker I decided to head up to the Apartment block to have a look at Hongo-san’s filming efforts there. He wanted to give filming with artificial lights a go. I had agreed to that because if one thing became clear in the past weeks then that when it’s dark Tawaki could not care less about being in the spotlight of a head torch. It’s as if they don’t eve perceive the artificial light.

It was already quite gloomy up in the forest and Hongo-san had just switched on a LED panel that illuminated the Apartment Block. Only problem was that there weren’t any penguins in sight. The chicks and guarding adults were all back in the cave and none of the parents had returned yet to feed their chicks.

I clambered up the slope to where Hongo-san had squeezed himself and his enormous camera into the tent hide. I looked around and thought that the almost horizontal branch above and a bit behind the tent hide would make an excellent perch and vantage point to observe the show. I quietly climbed up the tree and found a really comfortable position up there. The Apartment block lay like a stage in front of me. Now we just had to wait until the prelude was over and the play would commence. 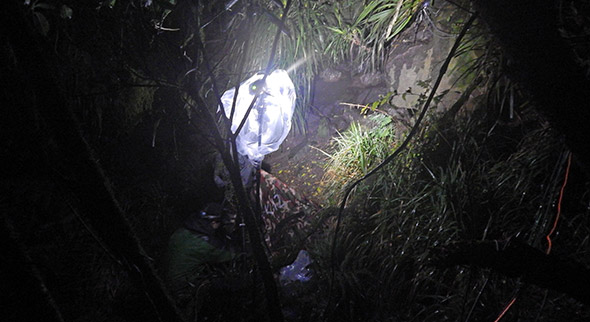 At first not a lot happened. A chick was heard issuing begging calls somewhere from the depths of the kiekie at the top of the Apartment block. The high pitched “weep-weep-weep” in my opinion was enough to make any caring living being want to regurgitate some food. Apparently the adult penguins that certainly were present somewhere in the shadows thought otherwise.

Yet the stage remained deserted. From time to time I saw some movement in front of Hongo-san’s tent hide, but it always turned out to be the lens of the 4K camera moving this way or that way to film the vast emptiness of the lit Apartment block.

After about an hour of sitting and waiting and just letting the mind drift, a male Tawaki waddled out of the overhanging kiekie leafs that covered the left side of the Apartment block like a stage curtain. He moved to the centre of the stage in the slender walk posture that is so commonly seen in Snares penguins – both flippers pointing forwards with a craned neck as if the penguin wanted to duck under some hidden obstacle. Then suddenly he stopped, stretched his neck and looked to the left, looked to the right, stood like that motionless for a few seconds. And then, as if he realised that no other penguin was watching his shoulders dropped, the flippers relaxed and he retracted his head looking slightly bedraggled. After a while he shook his body and moved off to disappear behind the kiekie again.

It started to feel as if the penguins suffered from a case of stage fright. So far they seemed to prefer to stay behind the kiekie curtains or the depth of the backstage area which was the cave. But around 10pm they got over that and the show finally started.

First a couple of chicks, their downy brown baby suits smothered in mud, wandered out of the cave and onto the stage. They apparently aimlessly moved from one side to the other and back until they finally seemed to have honed in on their destination and settled at their respective nest sites. There they sat and waited, occasionally flapping their wings that looked at least a couple of sizes too long despite the fact that the chicks were already quit big. T

Then a female tawaki arrived from the front left and entered the lit area. Its plumage was still wet and without hesitation it headed to chick number which immediately started begging with a high pitched peeping and rhythmic head shakes. The female gave a short but sharp trumpeting display to quickly turn her attention to her chick. To indicate its readiness for food it brought its head upwards from below her bill which required quite some contortion skills on the chick’s behalf as it was almost as tall as its mother. She opened her bill and the chick did not hesitate to poke what looked like its entire head into her mother’s throat.

Whenever I see penguins feed their chicks I do value the human way of feeding babies. Just imagine Mums would have to pre-digest and then vomit up the food for their offspring. What a mess this would create.

However, nothing was wasted here. The chick emerged again from its mother’s gape and both raised their heads to gulp down the bits and pieces that remained in their mouths. I peered through my binoculars in the hope to see what kind of food was transferred between mother and child, but not even a trace of the regurgitated meal was visible. Not 15 seconds after the feeding was completed the chick started begging again and the whole process was repeated. All in all I counted 7 feeding events before the mother decides to move of her nest and start preening right in front of Hongo-san’s camera.

Hongo-san was happy. Not long after the feeding show was over I saw him put the lens cap onto is camera and crawl out of the tent hide. He stretched his back looked up and saw me in the dim light of the LED panel sitting up the tree and released a piercing cry “HAAII!!” Apparently he had not expected to see me – or any other life-form – perched high up in the tree above him. His flight instinct almost made him jump of the ledge and down into the darkness but he gained control again and mumbled something like “Ohh, you scared me”.

Yet another form of stage fright, I thought.