Wow! Yesterday’s swell was good, but today it was impressive. Huge wave monsters stormed towards Jackson Head and crashed with a thunder onto the rocks when we headed out to the site just around lunchtime. Although it was still 3 hours until high tide, it was really difficult to get through without being washed off the rocks.

That would make for some rough landings for the tawaki returning to feed chicks today. And these waves offered such a dramatic scenery, that I thought it was a foregone conclusion that Ida-san (the director) would order Ida-san (the camera man) to film how small penguins battled big waves.

But Ida-san did no such thing. Instead Hongo-san assumed his usual post at the apartment block while Ida-san and Ida-san tried to get footage of penguins walking in the forest.

Isn’t that a wasted opportunity?, I wondered. But then, I am no film maker.

Ida-san (the director) went up with me and Sam to the scenic nest; he wanted to get footage of penguins arriving in the Hilltop colony. As soon as he assumed his post above the gully that the penguins climbed up, it started to rain (although “rain” is too neat a word to adequately describe the amount of waters that were dumped on top of us).

Sam and I headed downhill again to place some action cameras along the penguin pathways in the kiekie further down the hill. We made it as far as Ida-san (the camera man).

When we wanted to head past him, he signalled downhill with one hand. There were two Tawaki standing on the trail looking sceptically up at Ida-san who had built himself a make-shift hide out of two Bunnings Warehouse umbrellas.

Sam and I dropped behind some bushes and waited.

10 minutes passed. The penguins did not move. With no canopy to speak of above me my ageing Oringi gear was all that protected me from the almost tropical-strength downpour (minus the corresponding air temperature, that is). In short I felt really uncomfortable after a very short time. I had to move or I would get cold. 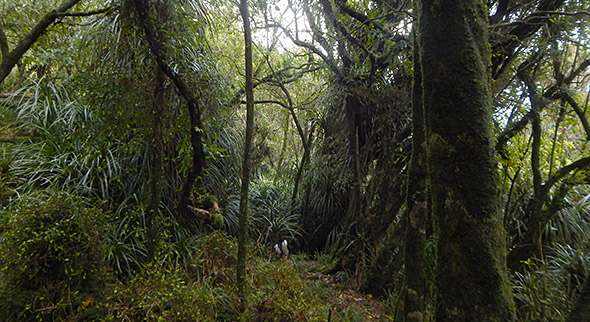 Sam, who had hidden behind a fern on the other side of the penguin trail seemed to have crept into his GoreTex jacket, was unresponsive to my gesticulations trying to tell him I had to move. I moved anyway. I made it to the creek that ran through a steep gully to my left and got down to the shore. It was raining mackerel and trout. As fast as I could I moved to my cave hide out.

Once in the cave I started to worry about Sam. The problem with Sam is that his way finding skills are not too flash. And with me sneaking off to get out of the rain he would have no one to guide him out of the forest once the penguins had moved past Ida-san (the camera man). To make matters worse, Sam’s radio seemed to be dead as I could not raise him via my walkie-talkie.

Aw, come one, it’s the middle of the day, he’ll be fine, I said to myself but deep down inside I knew that wasn’t really how I felt.

A couple of hours later my radio crackled “Sam to Thomas.”

“Oh, I am with Hongo-san. I finally found the tent I got lost for an hour.”

Oh bugger, it had to happen. Sam spent more than an hour lost in the bush, getting tangled up in kiekie and always ending up where he started before he finally managed to find his way back to the apartment block.

I left my cave and climbed up the ropes to meet Sam at the director’s tent. Sam looked a bit shaken but as fine otherwise. I promised him not to leave him behind anymore and we both headed down to the creek area to finally deploy the action cameras.

First we climbed into the kiekie next to the rock arenas. Quite obviously a lot of penguins used a tunnel through the tangle of vines – a perfect spot for one of the cameras. We climbed into what henceforth will be known as the “kiekie tunnel” to set the cameras. While Sam was busy placing the device a penguin came down the tunnel, walked up to me and ducked under my legs apparently oblivious of the fact that I was not part of the vegetation.

After both cameras were in place we headed down to the rocks again where we spent the rest of the afternoon watching penguins land in the surf which was still considerable despite the progressing low tide. While it was still impressive to watch single tawaki land in conditions that can only be described as spin program of a washing machine that forgot to drain the suds first. 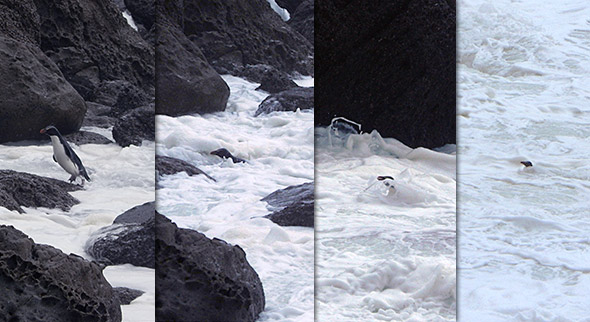 Sam and Ida-san (the camera man) headed back to town around 8pm, while I remained behind with Hongo-san and Ida-san (the director) to watch tonight’s play up at the apartment block. Where really nothing happened in nearly 3 hours.

It was going on midnight when we finally headed out to the car park.