The last week of this season’s field work is upon us. And we decided to deploy two more i-gotUs. Best time would be sometime in the middle of the night when presumably the majority of birds had returned to their nests, most of which are deserted during the day. That way we could combine waiting and looking out for our Hilltop logger bird in the afternoon and evening with the logger deployments. 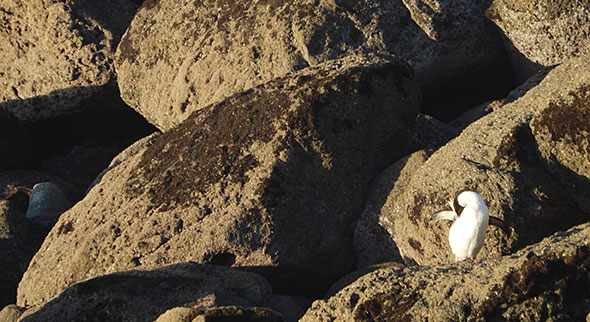 Aprés-swim – there’s nothing nicer than an evening preen

The wait and look-out it quickly summarised – we did not see our bird and consequently get the logger back. I really start to wonder whether we are looking at the right spot for her. This is a problem we need to tackle a bit better next year. How we are going to do that… well, I’m still working on it. 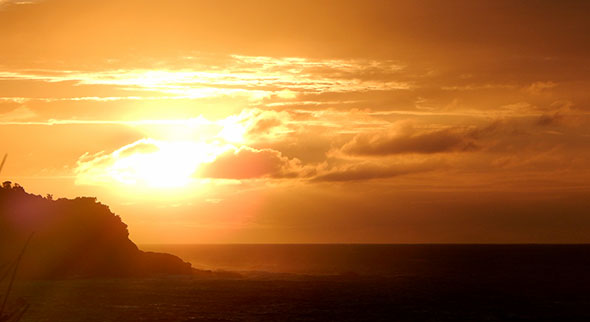 Another lovely sunset over Smoothwater Point

However, by know we know that the creek access below the apartment block and arena areas is one of the busiest access routes which I would consider a good indication that this is the only access to the aforementioned areas. Based on this assumption we decided to deploy our loggers at the apartment block. Apart from the fact that the nests are reasonably accessible there, it would be pretty cool if we could provide Ida-san with some first-hand information on what the penguins they have been filming were up to out at sea.

But first I decided that we have a quick look up on Hilltop to see whether our logger bird might have returned to their nest without us noticing it. The climb up to the breeding area high above the sea was quite serene with a full moon rising into a starry clear sky. The view from our logger bird’s nest overlooking the Tasman Sea was spectacular. Unfortunately our bird must have been less interested in the fine views. She wasn’t there. Neither were her partner or chick.

We headed over to the apartment block. There was quite some noise, which was a good sign. Ursula peeked over the rocky ledge in front of the apartment and whispered “There are males and females with the chicks. Looking good.”

We had two loggers that were programmed to start recording at 4am tomorrow morning. We decided to fit the devices to a female and a male. If we managed to get data from both deployments we’d also have an indication if we can expect sex differences in foraging behaviour. Considering that females are principally the sole suppliers of food for their chick (at this stage anyhow) this could almost be expected. The males had fasted for more than four weeks during incubation and chick-guard, so there would be quite some catching up to do for them.

Ursula swiftly moved in and out and returned with a female on her arm that wasn’t too impressed with what was happening. She fought furiously packing at Ursula and trying to slap her with her flippers. And all that for less than 15 inconvenient minutes that involved weighing her (2900 grams, good weight compared to the other females we’ve handled which were all around 2500 grams) and attaching the epoxied i-gotUs.

When I attached the loggers to the bird’s back feathers I realised how small the GPS loggers actually were. There was hardly enough room to wrap three stripes of tape around them. So I made extra sure that every millimetre of tape stuck really well to the device. I don’t want to lose another one because it falls off. I also decided not to use rubber glue to seal the tape after the logger was neatly attached to the penguin’s lower back. The rubber glue helps to extend the period the device is going to stay on the bird. But considering the problems we have recapturing our Hilltop bird I think I’d rather have the device fall off in one or two weeks’ time than having the bird swim around with it for a month or so. And since we’ll have to recover the devices in the next week anyhow, there is no point for a rubber glue seal.

Once the attachment procedure was over, I crawled up to the nest sites, deployed a nest camera and grabbed what looked like the female’s neighbour, a male penguin. Boy, did he give me a beating! I mean, he had all the right to do so, but did he have to latch onto me with his beak and twist? He gave me a really good bruise that I can still feel while I’m sitting here writing this.

While I weighed the adult, Ursula released the female into her nest. The bird did not take any chances and fled into the cave where several chicks huddled together guarded by a bunch of adults that looked like they would much rather huddle up with the chicks than form a protective wall of penguins around them.

Attaching the device to the male went just as smoothly as with the female. While I was busy with wrapping the logger up with tape, I muttered to Ursula “You know what? I think this guy might actually be the mate of the female we just equipped.”

Ursula released the male penguin and we quickly retreated down to the film crew’s tent. Ursula checked her watch.

“It’s going to be a close call with the tide.”

It was already going on midnight. With high tide being just before 1am it would be difficult to climb around some of the bluffs to get back to the track to the car park. That we had a full moon would not help either.

We pushed through the kiekie and started the steep climb down the ropes to the beach. I was just about to lower myself down the last bit of rope when I heard a bark below me. I looked down and in the light of my head torch I spotted a female fur seal sitting just where I would come down. There was what looked like goo on the rocks next to her. She looked up at me turned to run away, but thought about it a second time and turned around and crept back towards the goo.

What was that? I focussed on the goo and only now noticed that the brown stains around it was blood. And half hidden beneath another rock I saw the small, wet behind of a much smaller fur seal. Or rather – a sea lion baby and the goo was the placenta! The female fur seal had just given birth to a pup!

“Oh shit, we gotta find another way! There is a new born fur seal down here. We don’t want to scare mum away.” I called up to Ursula.

We sidled along the muddy slip that was difficult enough to tackle with a rope. Here we had nothing to hold on to. I don’t know how but we made it down to the rocks about 50m to the right of the fur seal. We gave her a wide berth by climbing past her as far down the rocks as the tide would allow us.

Yes, the tide. By the time we had made our way around past the creek penguin access point the waves were almost crashing up to where the vegetation began. It did not look good for us getting out before tomorrow morning.

We did not. We managed to get to the first bluff. And that’s where we are now, sitting on the rocks, waiting for the tide to go down which is probably another two or three hours. Well, at least it’s not raining. In fact, I’m not sure if one could pick a better night to be bluffed by the tide that this one. And amazing full moon hangs above us turning the sea off Jackson Head into a silvery glittering expanse. 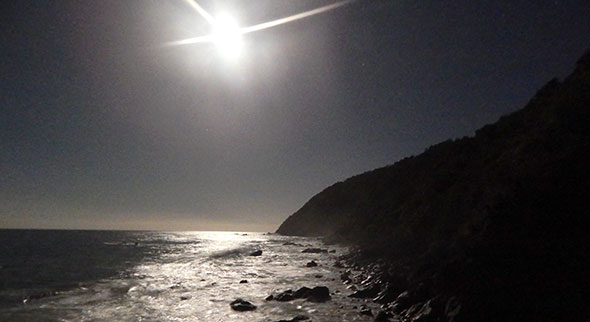