I should use my superlatives more carefully. Because if yesterday’s swell was impressive, the waves that shook Jackson Head today were tremendous!

However, when I first came to the Wharekai Te Kou walk car park I could only suspect that. I dropped off Hongo-san and Kamai at the car park – the Ida-sans and Sam were today on a penguin safari with Gerry Sweeney up North. I headed back to Neil’s Beach. I had to pick up a couple of sleeping bags I forgot in the Dibbens residence when we left a couple of weeks ago. I had a quick chat with Jimbo, a fishermen and owner of the Backpackers next door, and then I headed further down the road to have a quick chat with Geoff Robson.

I was all geared up and ready to do my daily boulder hopping routine to our study site about 2 hours before high tide. The tramp along the rocky shore is never really easy, but today this turned out to be more difficult than I thought. That there weren’t any penguins on the shore should have given me an indication what I was getting myself into. 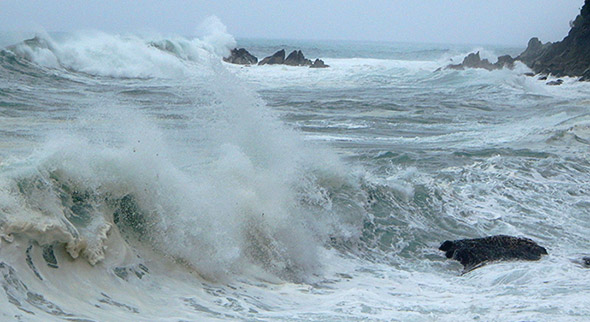 The tide was coming in and combined with the heavy swell it created freak waves at regular intervals. Very short intervals. While finding my way from rock to rock I also kept an eye out on the approaching waves. Whenever one of these monsters seemed to just grow rather than break I had to seek refuge behind some rock and wait for the short moment of mayhem that would ensue.

With an enormous thunder, the wave would break straight onto the rock, creating a white wash that would leap over rocks at an alarming pace. Most of the time I was lucky and only my gumboots ended up in a shallow swirl of white water. But in the 10 minutes it took me to get to my cave, two waves got me good. Crouching behind a rock the wave would wash over my shelter leaving me briefly inside an enclosed water cave that would collapse around me, water raising up to my thighs. It was dangerous being out here.

And the penguins knew it.

I had barrels of adrenalin rushing through my system when I finally dragged myself into the amazingly dry cave. No sign of Butch or Ahab. Just the thunder of monster waves crashing onto the shore, occasionally sending tremors through the rocks I was sitting on.

Here I stayed for the next few hours. The tide rose and rose, and the waves got bigger and reached higher up the shore. Only my cave was miraculously spared from the wild floods. After high tide, I spotted the first penguins trying to land. 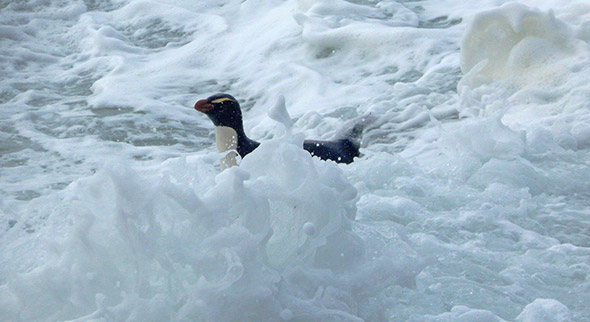 Looking for a way in

When their attempts to get ashore were impressive yesterday, today it seemed like sheer madness. Again and again the birds would get close to the rocks or even attempt to get a foothold only to be violently washed away again by another wave. But always they would pop up again in the white water of the wave’s surge. I timed a few of the landing attempts. The longest lasted 42 minutes after which the bird eventually giving up and disappeared again in the depths of the ocean.

However, a lot of birds made it somehow. And for every successful landing I gave a loud cheer. I was thoroughly impressed how such small a bird could not only withstand the brutal force of nature but actually outsmart vicious waves that seemed to have a mind of their own.

A human would have had no chance down there. For the penguins it’s a mere nuisance. 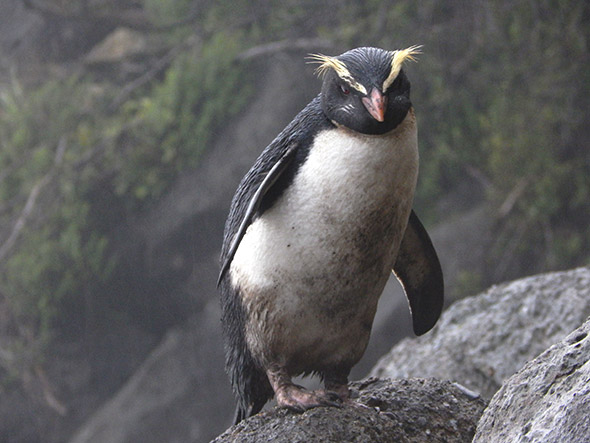 “On second thought, I might as well postpone that bath until tomorrow…”

Around 6pm penguins started to appear on the rocks around my cave again. One of them was Ahab. And as if to reinforce the fact that I chose the right name for the guy, he started to beat up one of the female penguins that had just landed after a 30-minute ordeal.

Now, the aggressive behaviour in crested penguins has always astounded me. While during the early breeding period, fights for mates and nest sites seem to make sense, it is the countless attacks particularly on females by non-breeders that seemingly do not serve any purpose. Pure hooliganism. And Ahab’s behaviour clearly fell into that category.

He would walk up to the female bump into her with his breast and then peck her in the neck trying to grab the skin and twist it. If he successfully latched on to her neck he would start to bring down a staccato of flipper beats on her back.

The purpose of this exercise? None other than solidifying Ahab’s image as a tough bugger.

The female, of course, wasn’t stupid and simply moved on leaving Ahab behind who shook his head and looked somewhat forlorn. I have to say I did not feel particularly bad for him.

Another interesting observation was a juvenile penguin that trotted after an adult up the rocks towards the breeding area. Now that in itself is not that an unusual a sight since a few days now. However, this juvenile was a bit different. It had a white beard. On first sight I wondered whether we a different species, a Chinstrap penguin perhaps, had made it to the West Coast. But of course a peek through my binoculars revealed the short yellow crests and the clumsy movements of a tawaki juvenile. 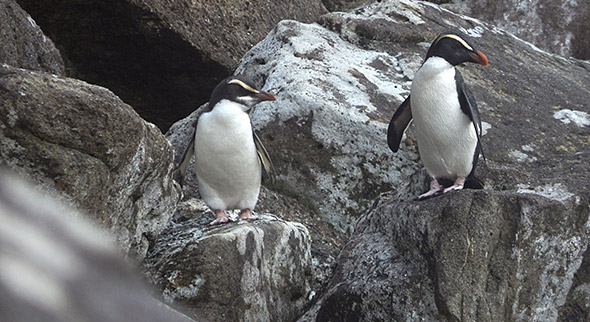 The rain never really stopped all day. But it turned to drizzle in the late afternoon. Of course, mixed with the vast amounts of spray in the air it was still enough to get you wet in seconds.

And that accurately describes the state I was in when I climbed up to the apartment block to watch tonight’s play. As yesterday, it is quickly summarized.

Hongo-san and Kamai packed up all valuable gear and secured the cables as we would not return for the next week and a half. Loaded with gear we got back to the car park just before 10pm.