My alarm clock went off at a humane 7am this morning. But it did not take me long to convince myself that it was quite alright to have another wee snooze before getting up. Outside it was bucketing down.

And it kept on doing for most of the morning. So rather than assuming a lookout in the hide tent, Hotte and I busied ourselves with getting the house cleaned up, for today was the last full day of this year’s field work for the Tawaki Project.

After lunch the rain had turned into occasional drizzle showers so we had no further excuses but geared up and headed out to the Heads.

The plan for today was simple. Hotte would keep an eye on the coast while I did the first half of the camera run. Since we had to replace batteries in most of the cameras, this would keep me busy for quite a while.

Hotte on the lookout for our logger bird

The forest was dripping wet and particularly getting up to the Hilltop area was treacherous to say the least. I struggled with batteries that would not come out of the trail cams and cursed the flimsy straps with which I had to tie the cameras to rocks, trees or any other, less suitable form of vegetation. It all took longer than I thought.

Back at the apartment block I carefully approached the camera just in case our logger female was at home. But she wasn’t. That was okay. I was expecting her to return from a foraging trip today anyhow and Hotte kept a close eye on who arrived and whether they were carrying any additional freight. He would have called me over the radio if anything happened. 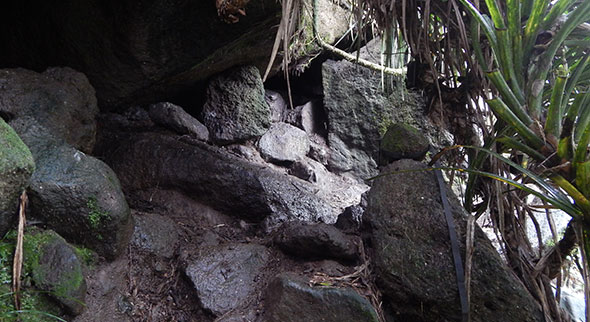 The deserted apartment block – well, actually there is a crèche of six chicks in the cave

After a couple of hours I finally ran out of batteries and SD cards; today’s camera run was done.The penguins checking out the guy fiddling with the cameras were certainly glad when I decided to call it a day up here in the nesting area. 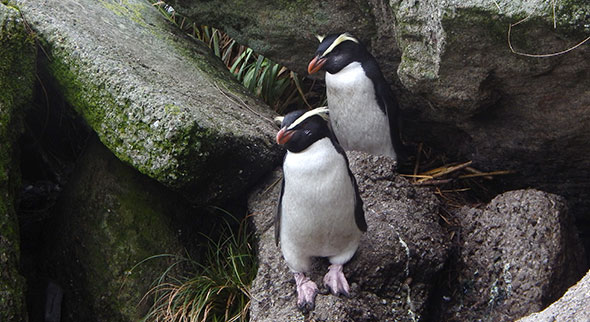 Checking out the annoying camera dude

I headed down the rope to the rocky shore. However, rather than going back to the hide, I decided to crawl into a cave-like overhang – it was drizzling again – and get the small laptop from my pack and have a look at the beach camera as well as the logger nest camera data.

No trace of the logger bird on any of last night’s trail camera images sitting at the Creek beach access. As predicted. I started to flick through the nest camera data.

The radio crackled inside my bum bag.

“Umm. I…err… I think the logger bird has just returned.”

Hotte did not seem too certain about that. I fiddled with the bum back to get the radio out when a more assertive Hotte proclaimed “It’s our bird! It’s our bird!”

“I’ll be with you shortly!” I replied. “Just don’t let it go anywhere!”

I crammed the laptop back into the backpack and crawled out of the cave in record time and started to boulder hop round the point towards the penguin landing.

“It’s on the move!” Hotte shouted into the radio.

“I’m coming! If I don’t make you go after it!” I wheezed while negotiating the rocks. When I reached the penguin landing area I started to hunch and move carefully from rock to rock. I did not want to send any of the penguins off in a flight.

“She’s almost up at in the creek!”

I peeked around the infamous rock where I had managed to get the logger off the other Tawaki yesterday. No penguins in sight. I climbed further uphill turned left – and there she was. Standing on a rock looking at me as if she wanted to say “Oh great, that guy again.” She certainly expressed her thoughts on me when I picked her up and she started pecking my hands and arm.

Less than five minutes later I released her up at the creek – with another successful GPS logger recovery accomplished! We packed up and headed out shortly after the penguin had made her way up into the Kiekie.

It was a rather weird feeling to get into the car and drive back home to Neil’s Beach in daylight. The past 3 weeks we had always returned long after dark.

But best of all… the i-gotU had recorded more than 2000 GPS fixes in the past four days, representing two and a half foraging tracks. The penguin had performed quite some journeys in search for food, swimming up nearly 40 km away from Jackson Head and covering more than 100km of distance in a bit over 38 hours. This is certainly one of the wider foraging ranges I have observed in chick rearing penguins.

Interesting to see how the foraging ranges apparently change from very short in the two to three weeks after the chicks have hatched (i.e. the chick-guard stage) to rather long when the chicks are old enough to be left alone (post-guard stage). More interestingly still with the tracking data we have now is the observation I made on the rocky shore and in the nesting areas in the past few days.

One of the things I have been doing the past weeks – and never have delved into on this blog – is collecting penguin scat samples for DNA analysis to determine their prey composition. In other words – I have seen lots of shit. And during the chick-guard stage, the penguin poo looked quite different from what it does now. Back then, the stuff was mostly grey, almost silvery and had quite a strong smell to it which I knew from other penguin species. I am fairly certain that oily fish like sprat or anchovy were the penguins’ main diet. In the last week or so, penguin poo has turned to all kinds of shades of green. While my initial reaction was that the poo was from male penguins heading out after a prolonged period of starving while caring for the nest), I have observed female penguins returning form a foraging trip and offloading the green cargo as well. So the green colour is more likely coming from whatever prey they are eating at the moment rather than a result of bile going through an empty system.

So despite all the set-backs in the first weeks – be it from a lack of devices to start with, drowning of i-gotUs or our general inexperience to successfully recover devices on penguins that are able to disappear between rocks without a trace – despite all that we go home with exciting new information on Tawaki!