I headed out at 9am and made my way up to the tent below the apartment building. I knew that Hongo-san had used a deer stalkers tent to film penguin up close. And I knew that it had worked perfectly. I could not imagine that Hongo-san would carry out the tent if he knew that he would use it again when they return to continue filming in late October. So it must have been packed away in the director’s tent.

A deer stalkers hide tent is nothing more than a small teepee shaped tent, just big enough to put a chair in. It has viewing stripes on the sides and two entrances at front and back that can be opened just wide enough for a rifle barrel to stick out – or binoculars. I pitched the tent close to the overhang where the bird had spotted me yesterday. A folding chair and the installation of the vaporisers completed my mission. 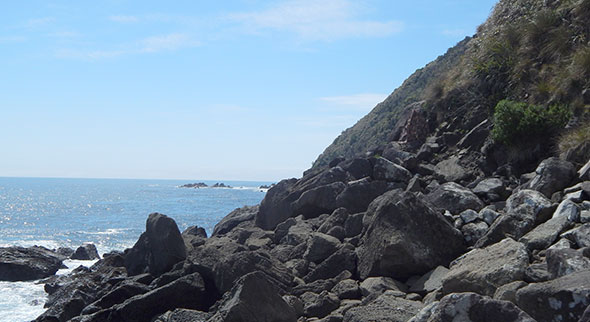 Spot the hide tent – it works on the penguins too

I made myself comfortable in the chair, zipped up the front door and started scanning the ocean for penguins while occasionally going through our trail camera data on my wee notebook. 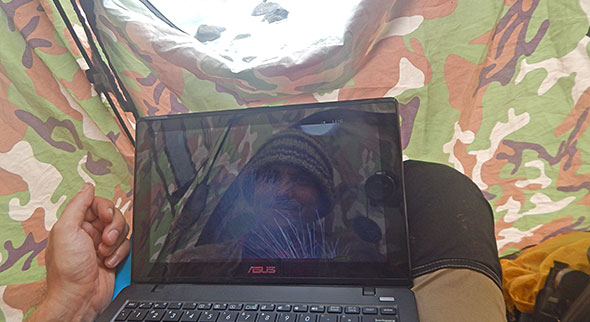 Today was a hazy but surprisingly warm day. A constant trickle of penguin returned to Jackson Head all through the morning and past lunch time. Several hundred meters our at sea I saw that the sooty shearwaters had returned, probably heading South for their breeding grounds on the Snares. I spotted a whale fluke and a blow, probably a Southern right whale. Then the sun came out and a large pod of Dusky dolphins started playing out there, jumping high out of the water and splashing and frolicking about.

They could not distract me from my quest, though.

The sea was exceptionally calm. Hardly a ripple on the ocean. I could see penguins long before they landed. They would hang around at the surface about 100-200m offshore just where they crayfishermen had set their pots. Some of the birds were having a bath, swimming on their backs, preening their bellies.

None of them had a logger though.

The notebook on my lap I reviewed the time lapse footage from the Creek beach access. The camera placement combined with the motion sensor activated seems perfect. And, at 1.30am in the morning… there she was, standing right in front of the camera.

Actually it looks as if she is holding the device into the lens while cheekily looking over her shoulder as if to say “You want this? Huh? You want this?”

Next I looked through the images of the nest camera (I had grabbed the SD card from the camera while I was up getting the hide tent). She arrived just after 2am at her nest, where her chick had assumed its post only half an hour before. Until 5.30am she fed and preened the chick and headed off again, presumably back out at sea. Unfortunately, our beach camera ran out of juice around 5.45am so that we probably missed her when she left the Heads. 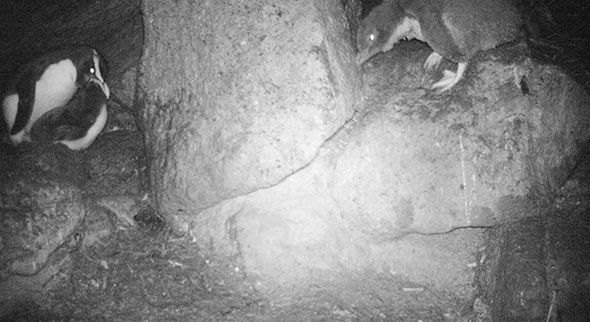 Our female logger tawaki feeding her chick at 2.50am

Since she had spent around three days out at sea, I doubted we’d see her today. But we still had another penguins to wait for, the male.

Hotte relieved me around 1pm assumed his new post inside the stalker’s tent hide.

I headed back to Neil’s Beach where I started to clean up things in the house. Plan is to leave the day after tomorrow.

I went back to the beach just before 6pm. It had turned into a misty day. Hotte headed back to the car and I watched for penguins with loggers on their backs.

I did not sit for long, when a logger bird jumped out of the water onto the rocks!

I called Hotte on the radio but he was already at the track entrance. Probably too far away to help me get that bird. And get this bird I would!

It was not the female. One look at the impressive honker and I knew I had the male Tawaki in front of me. Just like the female yesterday seemed a bit wearier than the penguins around him. He kept on looking in every possible direction, but the stalker tent seemed to be doing the trick. 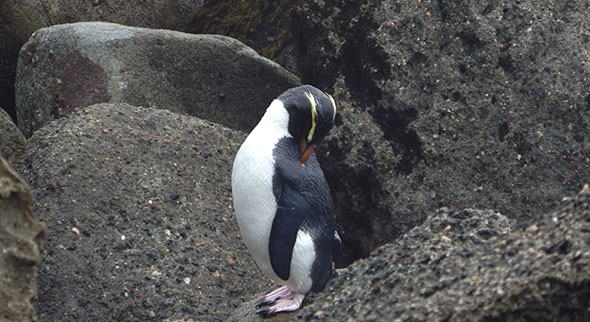 In a group of three birds, the penguin started to march uphill and disappeared behind a large rock. A minute later two birds re-emerged on the other side of the rock. None of them had a logger.

Under no circumstances would I leave the tent until the logger bird was way up the rocks so that retreat into the water would not be an option any longer. At least that was the plan.

The two other penguins started preening themselves. Extensively. A seemingly endless process of readjusting every single feather in their plumage bending their necks in the most impossible ways in the process.

Where was the logger bird? Was it still behind that rock! If only I could see…

Then finally the two preening queens started moving and disappeared up in the creek. Our logger bird still made no move.

“Okay. If you want it this way, you can have it!” I mumbled and climbed out of the stalker’s tent. I carefully climbed over the rocks down to where I thought the logger bird must be, spring balance and weighing bag in hand. Oh so slowly I peeked around the rock behind which the bird had disappeared 20 minutes ago and found… nothing.

The bird wasn’t there! How on earth could he have disappeared! Not again!

I searched every crevasse, every nook and cranny in the rocks. Nothing. He must have gone back to sea.

Angry that I had let him win another round I retreated into the tent. I was fuming! How on earth are we supposed to recapture logger birds in this terrain? We can only capture then if we see them. But if we see them it seems the penguins see us as well. And after the handling procedure to attach the loggers, they are apparently not very keen to go through with this a second time.

While I was still cursing and swearing, a penguin with a logger attached to its back just hopped out of the water together with another loggerless penguins.

I waited. Exactly the same game as before, two penguins disappear behind a rock, but only one bird shows up at the other end.

I waited. The other penguin preened.

I waited. The other penguin headed up the hill and disappeared in the creek.

I waited. I kept a close eye on the water this time. I was absolutely sure that the penguin had not gone back into the water. More penguins arrived, headed halfway up the beach, preened and disappeared.

“Okay, okay! You win!” Once again I grabbed spring balance and weighing bag and climbed down to the rock where the logger bird had disappeared. Only this time, he was still there when I arrived!

The penguin hunched underneath a rock and when approached, he scurried further down a gap between the rocks. By the time I was on my knees he had disappeared again.

I circled the rocks under which the penguin must have been hiding. And then I spotted a foot and a flipper poking out of a 10 cm wide crack. I crawled towards it and was greeted by a hiss and a peck when I tried to feel my way towards the penguin. Could I pull it out of there? No, not really, the gap was too narrow even for a small bird like a Tawaki. The penguin would fight during any extraction attempt, not to mention what he would do to my fingers while I tried to so. No, no chance I would get him out.

However, I did not give up that easily. I took off my right leather glove and offered it to the penguin with my left. He took a bite and tried to pull it into the crevasse but of course I did not let got. While he was busy with our little tug-o-war I gently grabbed his tail and pulled his lower back closer towards the through the gap. There was the logger!

With one hand I started to peel off the tape which was harder than I thought. It was almost impossible. Then an astonishing thing happened.

The penguin stopped pulling the glove. In fact, it was as if he knew what I was trying to do because he turned slightly so that the device on his back was now poking through the gap! I could actually use both my hands to remove the logger. I could not believe it when I held the device in my hands.

“There you go, wasn’t that bad, was it?” I muttered when I retreated from the rock.

It was a solid draw. The penguin managed to avoid being handled and weighed a second time, but I still got the logger back. I retreated to the tent and needed the next half hour to cam my nerves. I hadn’t even noticed how pumped up I got during the logger recovery. And I am sure that our logger bird would have needed just as long to recover from this as I did.
When I left the tent just after 9pm, I checked the rock with the night vision scope. The penguin was gone. He once again disappeared without me noticing it. However, I did not blame him for this and wished him best of luck for the rest of the breeding season.

“There you go, wasn’t that bad, was it?” I muttered when I retreated from the rock.

It was a solid draw. The penguin managed to avoid being handled and weighed a second time, but I still got the logger back. I retreated to the tent and needed the next half hour to calm my nerves. I hadn’t even noticed how pumped up I got during the logger recovery. And I am sure that our logger bird would have needed just as long to recover from this as I did.

When I left the tent just after 9pm, I checked the rock with the night vision scope. The penguin was gone. He once again had disappeared without me noticing it. However, I did not blame him for this and wished him best of luck for the rest of the breeding season.