Let me spell it out. This was the most frustrating day of all!

A logger bird returned, unfortunately in too many ways. Because first it returned to Jackson Head, but then it spotted me – or rather my head poking out from behind a rock – and then it decided to return to the ocean.

And it did this twice!

Around 6pm I spotted a bird with an obvious lump its back in the white water close to the rocks just below the Creek beach access. I followed its movement with my binoculars. The bird landed fashioning a data loggers on its lower back. It moved very carefully and observant. While other penguins that had landed seemed to go about their daily business as per usual, the logger bird appeared weary. As if it knew we were waiting.

It twisted its head very way and then it made eye contact with me, turned around and jumped back into the water.

The sinking feeling of defeat! How on earth could the penguin have spotted me? I mean, I tried to stay hidden as much as possible, but of course if I want to see something, I have to stick my head out. At least a bit.

I calmed my nerves by retreating further up the rocks and crouched under an overhanging rock. With the binoculars I scanned the water surface. Yes, there it was! The logger bird was still out there and it would make another attempt to come ashore. All was not lost. In the distance more and more penguins appeared on the rocky shore. Yes, she would come back. 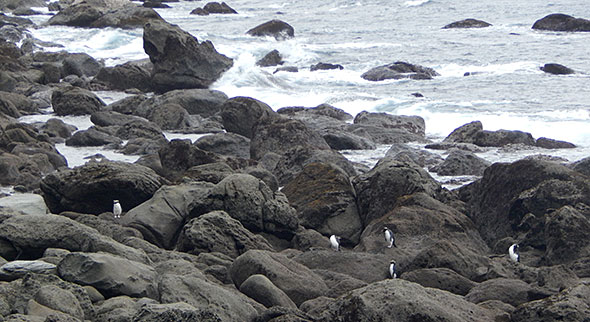 Tawaki on the rocks, just not the one we’re waiting for

I remained squeezed underneath the overhang, tried not to move despite ferocious attacks by sandflies and peered through the binoculars. 15 minutes passed, 30 minutes. And I lost sight of the logger bird.

All of a sudden she was below us (I was fairly confident it was the female) out on the rocks with another Tawaki. Again, she looked in every possible direction while her companion (no logger) comfortably settled on a rock and started to preen itself extensively.

I did not move. I did not lower my binoculars. Heck, I don’t think I even breathed.

And what did she do? Make eye contact and – zoom! – off she went back into the ocean. And this time she did not re-emerge. She was gone for good and would not return tonight.

I was flabbergasted. How on earth did she know I was there? For all I knew I was just another rock wedged under another overhanging rock. I had paid for my patience with about 500 new sandfly bites which would remind me about this defeat for the next week or so.

By now darkness had set in. And just to make matters worse, it started to rain. In the rain, the night vision scope turned out to be utterly useless in these conditions as the rain drops would reflect the infrared light to create a blinding spectacle of sparks in the view finder. Spotting a penguin let alone one with a tiny data logger attached to its back was impossible. And actually, same applied for our head torches.

No point hanging out here any longer. We had to accept defeat. The penguin won this round. Well played, well played.

However, we now know that we are waiting at just the right spot for our penguins. No doubt about that. And we still have another joker up our sleeves.

I will play it first thing tomorrow morning!

« And now for something completely similar
Stalker »