We are enjoying gorgeous weather here on the West Coast while the rest of the country experiences pretty wet conditions. The weather certainly helped us getting three more data loggers on chick-rearing females last night.

A georgous sunset over Jackson Head.

Putting the devices on proved to be a rather quick job thanks to the fact that we are four people at the moment. In teams of two we could work simultaneously at two sites to start with. And having Klemens Pütz on board also turned out to be a bit of a game changer.

Klemens introduced us to a new technique to get penguins off their nests, which is as effective as it is simple. Klemens produced some catching hooks out of 3 mm fence wire he had found in Neils Beach. The contraptions look like primitive shepherd’s crooks – a length 2.5 m length of wire with the end twisted backwards to form a narrow hook. With the hook it is now possible to get penguins out of otherwise inaccessible burrows by gently pulling the birds out on one of their legs. It speeds up the whole process too so that logger deployments can be completed in under 10 minutes. That means a lot less stress for birds as well as researchers. 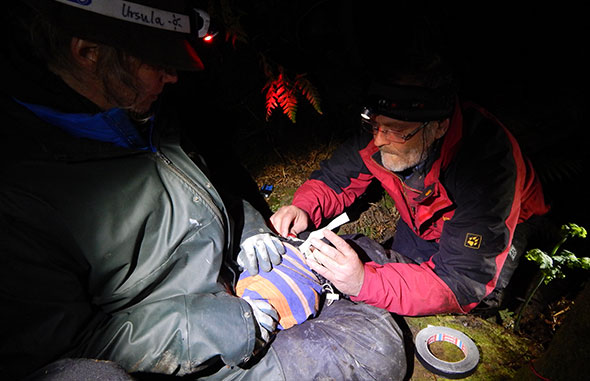 All three logger birds came from nests that seem to do rather well with healthy looking, reasonably fed chicks. Others were not so lucky. Another of our monitored nests failed yesterday where we found a freshly dead chick. When we later examined the stomach content of the small carcass we found a solid block of squid beaks occupying almost two thirds of the organ. Penguins cannot digest squid beaks easily and either need to break them down by swallowing small stones or just wait until they slowly dissolve. By the looks of it, being fed mainly squid is very bad for the chicks as the beaks quickly accumulate and cause severe constipation that eventually kills the chick.

Some of the chicks look quite skinny while others are doing better. On one of the three nests where we deployed loggers last night, the chick weighed 1.3Kg. The similar sized carcass we collected today was only 300g. 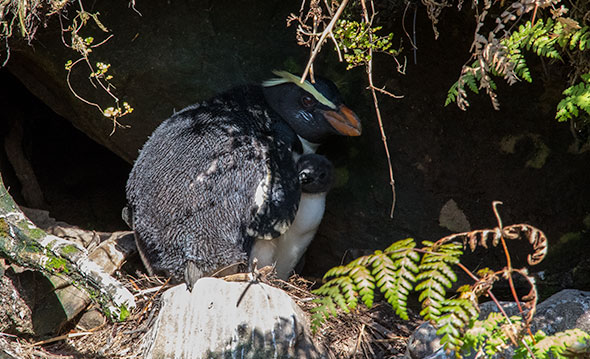 Although it is rather sad to see so many nests fail, it is fortunate that we are here to study the penguins’ foraging behaviour. The data will be so valuable to see how El Niño affects these birds. Next year will surely be a lot better again – and so will be the foraging performance by the tawaki of Jackson Head.