We woke up to blue skies and sunshine. A welcome change to yesterday’s downpour. However, it blows a howling south-westerly which throws enormous seas at Neil’s Beach – and no doubt at Jackson Head. With high tide being smack-bang in the middle of the morning, there’s nothing for us to do until later in the afternoon. That’s fine as we’ll have to try to get our logger birds back this afternoon and evening.

So a bit of recreation was in order. Recreation which allowed us to stock up on our bread supplies and to check emails for a change. Since Haast alone has very little else to offer, we decided to take a wee trip to Monro Beach some 80 km North of here and have a look at the dramatic scenery of huge waves crashing over the rock stacks. 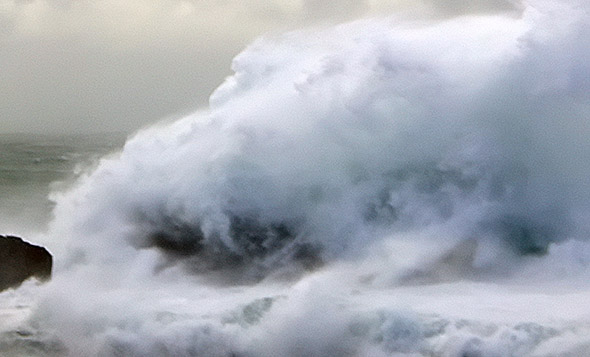 The actual sights far surpassed my expectations. The surf not only crashed over the rock stacks, it all but drowned them. All that illuminated by sunlight in front of a backdrop of dark grey clouds over the horizon… it was the perfect motif for an impressionistic painting.

How the penguins would fare in these conditions was beyond me. And just looking at the horizon I could see that even way out there the waves were breaking creating truly nasty conditions. If I were a penguin, I would not bother with staying at the surface longer than necessary. A breather and I would head back down into depths where the water was less behaving like a washing machine.

Of course, that idea might have some relevance for our logger data. The shorter the penguins stay at the surface, the less likely it is for the logger to store a fix. And the longer it takes the logger to calculate its position, the more likely it is going to fall back into cold mode. And in cold mode, the logger would need two minutes or more to determine its position. No chance that the penguins would stay that long at the surface in these conditions.

In other words, I was beginning to wonder if our i-gotUs would be able to collect any data in stormy seas such as these ones. So while we had plans to deploy our remaining three loggers tonight, just looking at the seas made me realise that it would not only be unfair for the penguins (who wants to carry a backpack through this mess?) but also pointless if we would expect the devices to not function correctly. So we’ll wait until it’s calmer again.

A purchase of several loafs of bread and checked emails later, we were back at Neil’s Beach with Ursula and I gearing up for a long night out at the Hilltop penguins’ main beach access while Hotte remained in the house to hold to fort. High tide was still three hours away and the waves hitting Jackson Head were pretty rough but we had no problems making our way to our designated lookout. 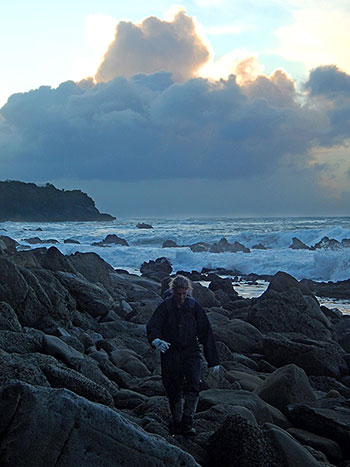 Ursula on her way to another night of logger bird stalking

At first not a lot happened. So I took the chance to hike up to the Hilltop and have a look at our logger nests and get the SD cards from the cameras that monitored both nests with 1 minute time lapse imagery. JH06 was… empty. No adult, no chick. Oh dear. JH13? Also empty. Oh no. Had we picked exactly the last night of the guard-stage to deploy our loggers?

I headed back down the hill and joined Ursula. We spread out over the rocks to cover more potential access points. It got darker but the nearly full moon illuminated the rocky shore in a way that we could see penguins coming up without the help of our infrared scope or our LED head torches. We sat and waited and shivered until midnight. We spotted around 20 penguins none of which carried a logger on their backs. We were cold and tired and disappointed. And we decided to head back.

We arrived back at Neil’s Beach just after 1am. Before jumping in the shower I had to take a look at the camera data.

At JH06 it seemed as if the female with the logger vanished from the nest shortly after we had released her. She then reappears just after 3am to head downhill her mate in tow just 5 minutes later. The male later returned and spent the first half of the day yesterday with the chick at the nest. The chick then disappears downhill – and has not returned to the nest since. The male popped into the nest off and on, but never hung around for long. 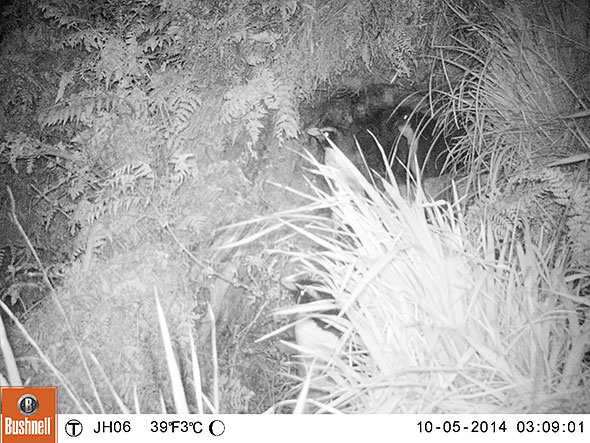 Our logger bird and her mate leave the nest

The second logger bird at nest JH13 on the other hand, stayed at the nest with mate and chick all night obviously not having the whole logger attachment procedure too hard – she slept through most of the night. At 5.23am both our logger bird and her mate left the nest and chick behind. At 7.56am the chick disappears from the nest after having been busy wandering around for the past couple of hours. Since then the nest was left empty with the exceptions of a few short visits by an adult tawaki which I’m not sure was any of the original nest occupants.

It seems we deployed both loggers on birds that have entered post-guard stage. This means that we will have very little chance to recover the devices at the nest sites. The chicks can wander around and crèche up with other chicks somewhere in the kiekie. Although it is believed that chicks generally return to their nest at night to wait for their parents to return and feed them, our camera data suggests otherwise.

Before we deploy any more loggers we need to establish how likely it is to get the devices back at this stage of breeding. Could be that our new batch of loggers have arrived too late. Sending another small curse about the non-delivery of our GPS dive loggers in time for the fieldwork, I fell asleep.