In truly appalling weather Popi and I managed to recover our first GPS logger carrying tawaki this afternoon. And despite all my concerns about difficulties of recovering penguins in the rugged terrain of Jackson Head it went extremely smoothly (well, smoothly as it can go while it is bucketing down cattle and sheep).

It went down like this. After taking a very slow start to the day – the sound of rain pounding on the roof of the house is not really stimulating to go out –  we geared up in the afternoon and made our way to the Head. Just to warm up we checked some of the cameras we have installed at nests, changed SD cards and, if necessary, batteries. As the afternoon slowly but surely turned towards evening, we made our way down to the rocky shore. We had checked the loggers bird’s nest and found its partner on duty. Which meant that we would have to wait until the penguin emerged from the sea and try to get her on the rocks.

If you’ve got things to do, being out in the rain is half as bad, really. But if all you have to do is sit and wait for a penguin to show up, you inevitably will get wet (or in our case ‘wetter’), cold and eventually miserable. Under such circumstances it’s best to try to get out of the weather as much as possible. So Popi and I squeezed ourselves under a large rock where it was easier for us to pretend that we indeed were out of the weather (which we weren’t, really).

But mind you, we only had time for one quick selfie… 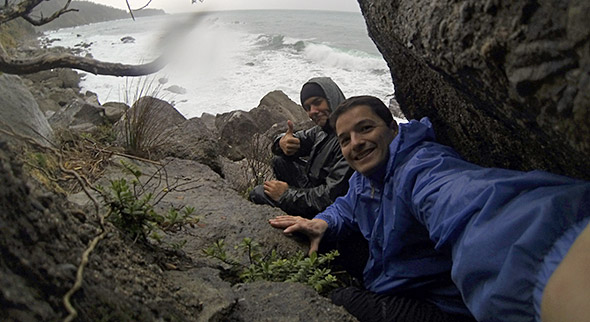 …when our bird appeared on the rocks just above the waterline!

“What? Can you belive that?”, Popi exclaimed while I carefully climbed out from underneath our rock and started to sneak up towards the unsuspecting tawaki.

The penguin stood on a rock preening and did not take notice of me. I had one last rock to negotiate. I took my eyes off the penguin. When I looke dup again it was gone! What? How? Where? For a moment I panicked. Did it spot me and hightailed it? I arrived at the rock the bird had been sitting on just a minute ago looked around… and there it was just below me, still busy with rearranging its feathers. Apparently it just did as Popi and I had done a short while ago and got out of the weather.

Next thing the bird knew was that a cloth bag slipped over its head. By the time I started to peel off the tape that attached the logger to its feathers, the bird had settled down on Popi’s lap. It clearly was quite alright with the fact that it would get rid of the backpack it had been lugging around for the past 48 hours.

Now, as I said earlier if you’ve got things to do, it is okay to be out in the rain. Well, this was very different. Not only were Popi and I focussed on getting the device off, weighing the penguin and getting head and foot measurements to determine its sex. We were truly stoked! From the forst look it seemed as if the i-gotU was good, no signs of leakage despite our rather unorthodox method of water proofing. Now if the NZ$100 device had actually data on board we could expect to see the first ever recorded foraging track of a Fiordland penguin tonight.

Popi released the bird not far from its nest site and observed how she headed back to where she belonged falling into an ecstatic trumpet concerto with her partner apparently no worse for wear!

That was a really good start! Despite all the doubts whether it was possible to work with tawaki that are often said to be extremely timid, we not only managed to recover a data logger from a penguin. Our intervention did not result in behaviour that could disrupt breeding or even cause nest abandonment. What a huge relief!

Popi and I were literally dancing back towards the car, totally on cloud 9. Rain? Who cares? We got the logger back and the penguin is happy!

Back in Neil’s Beach I cut the logger form its double-condom casing. I hooked it ono the computer and waited for the “Ding-Dong” indicating that the device was recognized.

I was just about to tell him that the computer would not recognize the device when suddenly – “Ding-Dong”.

I gazed at the screen. A window popped open to ask me wether I wanted to download the GPS data from the device. Ok?

“Downloading 2097 data points” read the message on the screen. What? 3000 GPS fixes? It worked? It really worked?

Yes, it did. Sort of. Most of the GPS fixes were recorded when the bird was sitting on its nest during the nighttime hours. However, it had performed two foraging trips. The first one yesterday, but GPS fixes stopped some 5 km northwest of Jackson Head about four hours after the bird had left its nest site around 6am in the morning. The next GPS fixes were stored just after 5pm about 4km north of the bird’s nest.

But the next day way like a birthday and christmas wrapped into one. We got a full foraging track! The first ever recorded in tawaki. And it was a surprise. For an offshore forager the bird stayed bloody close to land never putting more than 9km between itself and the coast. The penguin actuall entered the water in the middle of the night at around 2.30am then doodled around at the surface until daybreak slowly making its way to a point about 9km almost due west of the Head before it started to forage northeastwards for the next 8 hours. Just after 2pm it then turned back south landing where we eventually recovered it around 6pm. All in all it foraged for a total 16.6 hours covering around 55km in the process. 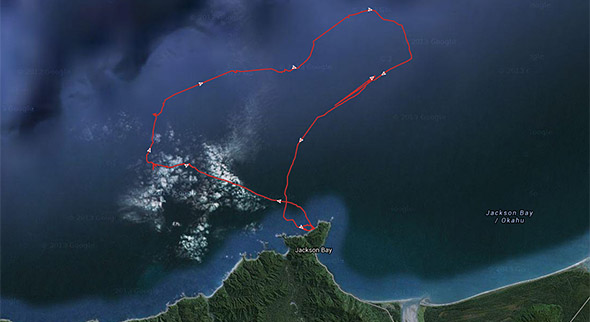 The stats read more like those of inshore foraging Yellow-eyed penguins!

We can’t wait to get more information in the next few days.