Across the Alps and back again

This was a long day today. I got up just after 6am, jumped into my truck and headed across into the Alps. I had to get to Queenstown airport by 11am to pick up Popi Garcia-Borboroglu who flew in today from Argentina.

When I reached the airport I found and email from Popi, telling me that he had missed his connecting flight in Auckland an would arrive about two hours later – at 11am. Well, since I was sure he told me he would arrive at 11am in the first place this was not as bad as it sounded. Just enough time for quick visit to the loo.

Where I unceremoniously met Popi.

He looked quite fresh despite his 13 hours flight from Santiago de Chile. We picked up his gear and headed out of the airport to do some shopping before heading back across the mountains again. Popi geared up on field equipment – working pants and gaiters were a top priority. At the supermarket we want berserk and left an hour later with more than NZ$500 worth of groceries. (Which sounds more than it actually is because grocery prices in New Zealand are obscenely high! I know because I spent the last year in Germany.)

We used the long drive back to catch up on all kinds on penguin gossip and discuss the problems we have with the supplier of our GPS dive loggers. Because up until now there is no news from earth&Ocean as to when they think they will dispatch the five GPS dive loggers we’ve order more than 5 months ago. Devices that are entirely funded by the Global Penguin Society. Popi is the society’s president and the one who raised these funds. So doubly embarrassing that we not only haven’t received the main devices for the project, but also have no idea when they might arrive.

Well, fortunately it wasn’t planned to use earth&Ocean devices from the start. At around NZ$3,600 a pop these things are far too expensive to randomly slap them on a penguin and hope for the best. We’ll conduct dummy experiments first, where we use cheap i-gotU travel GPS loggers and see how the penguins behave, if we can get them back without a problem and if the devices affect their breeding behaviour. And maybe we even get some data. I-gotUs have been used successfully on other seabirds like gannets – but to my knowledge not on diving species that spent most of their time under water like penguins.

But first… let’s give Popi a bit of time to get over his jetlag. And the best way to do this was to get him out into the field shortly after we arrived in Haast in late afternoon. We stopped at the Heartland Hotel, geared up and were away to Jackson Head West. 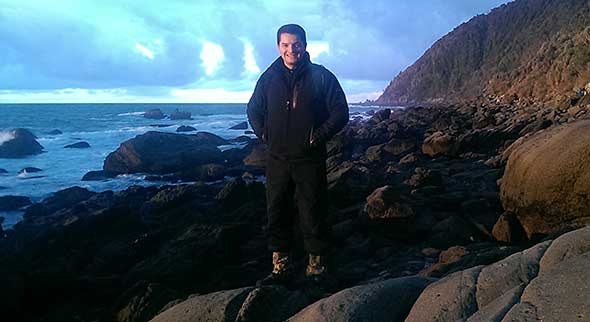 Popi on his first visit to Jackson Head… after a 20 hour journey from Argentina.

I cannot imagine in what kind of trance Popi must have been when he climbed up our rope route to the main filming site where Hongo-san was still curled up in the tent remote controlling the cameras up at the Apartment Block. 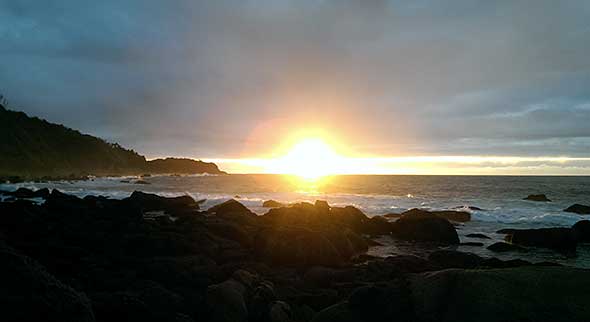 We did half of the camera run and managed to get down to the rocky shore just before it got really dark. Together with the Japanese film crew we boulder hopped back to the Jackson Head track. The lights of our head torches limited our peripheral vision to just a few metres which actually made boulder hoping somewhat easier – and, in fact, quite meditational. Back in the car, Popi told me that he had to fight dozing off while walking. That was just moment before his head fell backwards and he started snoring.