My Japanese companions were busy sorting their gear at the hotel and would need another couple of hours or so. I had a camera run to complete, so I drove out to Jackson Head about two hours before high tide which today was around lunchtime.

The tide was already pretty high when I emerged from the Wharekai Te Kao track. I quickly clambered over the drift wood and headed North. Just around the first rock I froze. Two tawaki stood in front of me giving me the worried eye.

By that I mean they turned their heads as if trying to look at me from as many different angles as possible. Their crests were erect and looked like tiny yellow wings suitable for hang gliding. They extended their necks bobbed their heads and took an uneasy step this way and another one that way.

Clearly the birds were not happy to see me here. But then, if they decide to land just next to the beach at the end of a well maintained track they are bound for encounters with humans.

Rather than gawking back at them, I quickly went past them and was on my way to our study sites.

The rocky shore was quite busy with penguins. Some busy preening, others on their way up in the bush, but quite a few were just hanging out. Who would have blamed them, it was sunny, calm and almost balmy.

One of the penguins I encountered looked odd from the distance. The face seemed almost completely white. Instead of white stripes in an otherwise black cheek, this fellow had white cheeks. The crest was short, very short. Clearly I had a juvenile in front of me. Juvenile tawaki with very white cheeks and a rather short crest

One thing all juvenile penguins regardless of species have in common is that they always seem to be a bit confused and unsure about what to do next. This fellow – for his for a juvenile already massive bill clearly identified him as a male – was no different. He started to preen, stopped and shook his head, walked a bit to the left, scratched his head with his short feet, preened again, stopped, yawned heartily and walked a bit to the right. And that’s what he did for the next ten minutes or hours for all that I’m concerned, as I walked on and past him. He barely seemed to notice (another common feat in juvenile penguins that they are also not sure whether to run and hide or check out this weird creature also walking upright on two legs).

I counted a total of four juvenile penguins on the 100 meter stretch I had to cover before I climbed up the ropes into the breeding colony.

Now, seeing juvenile penguins always is a good sign. It means there is recruitment into the penguin population, fresh blood coming in. That’s why it’s so concerning that juvenile penguins are a rare sight in Yellow-eyed penguins form Stewart Island, and lately Codfish Island as well. There we might have an aging penguin population that just slowly but surely might cease to exist.

I somehow have the feeling that the penguins from Jackson Head might be doing okay. Which is excellent considering their endangered rating. 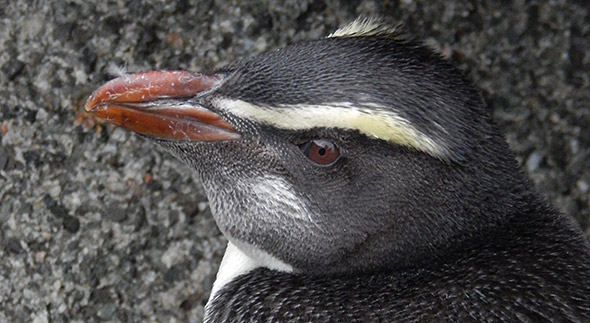 Whitish cheeks, a short crest and a brownish rather than reddish bill – clear signs of juvenile tawaki

I headed up to the apartment block to change the first set of batteries. Not a lot happening outside. A non-breeding male penguin sat on a vacant nest site and didn’t even batter an eye lid when I crawled up to the cameras. Once done with the job, I had a quick peek into the cave where I found six big and magnificently dirty chicks were huddled together. The only crèche that deserved this title I know at Jackson Head. All other crèches are two maybe three chicks strong – hardly enough to call that a ‘penguin kindergarten’.

I completed the camera maintenance of all the cameras below the apartment block before I settled on my favourite rock overlooking all of Jackson Head West. While waiting for the film crew to arrive I watched the steady trickle of penguins arriving home from their foraging trips. The sun was out, the sandflies too lazy to seriously have a go at me. In other words life was good. 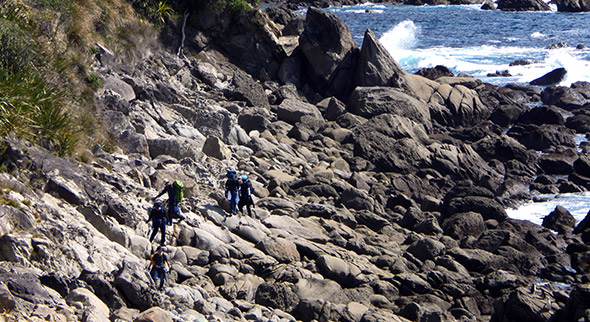 The film crew lugging their gear across the rocks

Around 5pm the guys arrived, lugging heavy packs of camera equipment over the rocks to meet me at the base, which was located just underneath my perch. For the rest of the night, they set up their gear. All the cables up at the apartment block were reconnected to obscenely expensive electronics (mostly Sony gear, who would have guessed) and filming hides. The extra cameraman, who also goes by the name Ida-san which makes addressing the director Ida-san a bit more tricky,… where was I, ah yes, anyhow, Ida-san the camera man had a crack at filming at the beach which probably was quite nice given that the sun started to set spectacularly illuminating the tawaki that shook water droplets out of their feathers and preened extensively on the rocks. 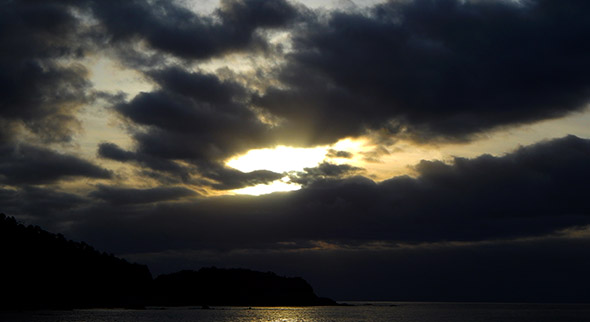 Yet another sunset over Smoothwater Point

Next thing I know, my stomach starts to protest. Right, haven’t eaten since breakfast. A last check that everything was as it should be with the filming, and then I headed out to get back to town for a well-deserved dinner.