We spent another evening hidden between the rocks below our logger bird’s colony. Today was supposed to be the last day of good weather before a southerly front hits the South Island bringing with it cold, wet weather. So better make the most of it and get our logger back. 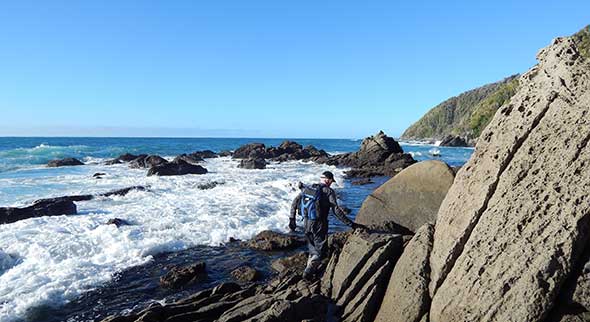 Hotte making its way across the rocks towards our logger lookout

Well, first thing we noticed was that the penguins seemed to be super careful today. The last few days they generally did not mind us peeking from behind our rocks. But today even the slightest hint of our presence stopped the bird in their tracks. This, of course, meant that we had to stay out of view entirely making it really difficult to check whether one of the birds was carrying a backpack. At least the sandflies weren’t as bad as the previous nights. 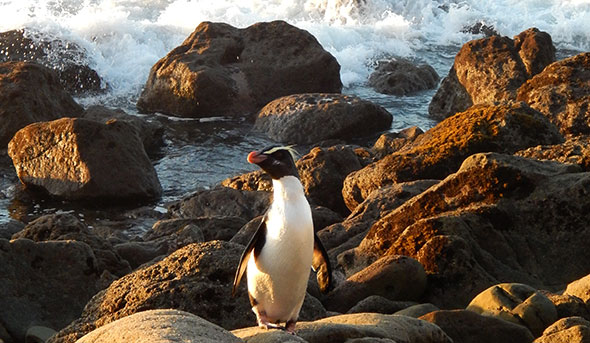 An ever so watchful tawaki coming home from work

At around 9.30pm when we had watched around 20 penguins finally making their move – all without logger – I headed up to our nest to retrieve the SD cards from the track cameras. Our nest was still empty. But when I peeked into the second burrow located just a few metres below the logger nest, I saw two chicks being guarded by a male adult. So that’s where the chick from our logger nest had disappeared to.

We got back to Neil’s Beach around 10.30pm. I immediately reviewed the camera footage. And I think we have confirmation – the bird we attached a logger to was not the mother of our chick! This morning, at around 6am our Bushnell camera recorded two adult penguins and a chick in front of the logger nest and none of the adults carried a backpack.

This means we indeed fitted our device to a presumably non-breeding bird that had just sought shelter in the nest when we scrambled up the hill. That also explains why the male had attacked her when I released the penguin into the nest after attaching the device. And, unfortunately, it also lowers our chances to recover this bird significantly. Non-breeders do not need to come back to land regularly as they don’t have any chicks to feed. And likewise, if they land, they don’t have to do so at a specific site as they don’t have a nest to return to.

We will have to be extremely lucky to get that bird back. The more likely scenario is that it will elude us until the device falls off in 3 or 4 weeks’ time.

There’s still a minimal chance that we get the bird. But first we’ll have to establish whether she still comes back to the colony where we fitted her with a device. To do so, I have decided to install a trail camera at the site where most of the returning penguins hike up into the bush. Maybe we can catch a glimpse of her and try again to catch her one of the coming nights. Until then there is no point in spending more evenings on the rocks, potentially agitating penguin with our presence.

It also means that we’ve run out of devices to deploy. We will get five more i-gotUs by the end of the week. But until then, we have not much else to do than doing camera runs every now and then. And considering the weather forecast they just showed on TV that is not that bad. They mentioned snow towards the end of the week…

« Hope dies last
Nothing new on the Western Front »